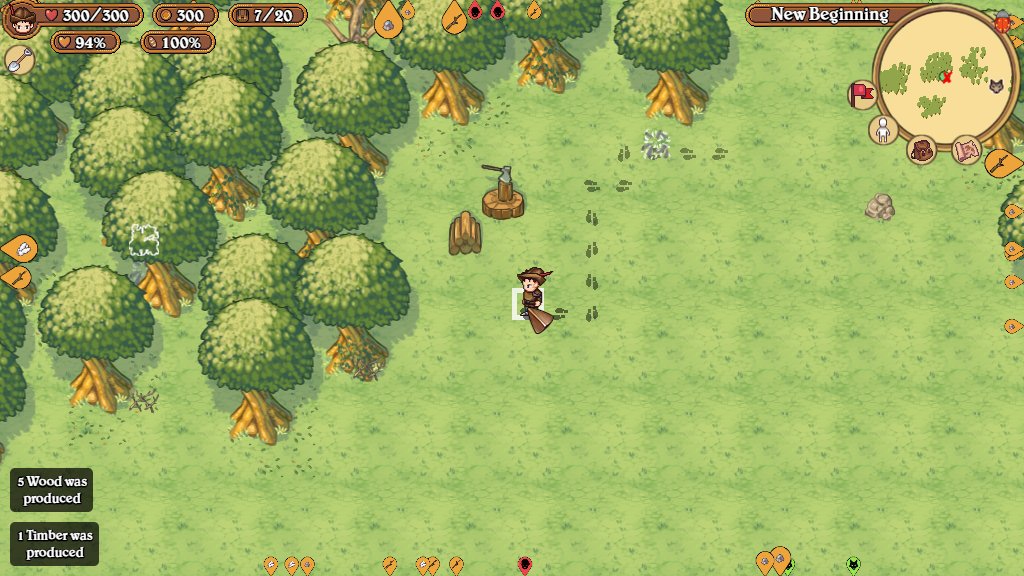 2 months ago by Jerome

Consider this game as "Early access": it's playable, but far from finished and your feedback will be crucial to guide the rest of the development.

Westward is a collaborative browser-based MMORPG where the players have to build a nation. “The story of the creation and defense of communities, the mastery of the land, the development of an economy, and the formation of a nation.” (Quoted from Wikipedia about a certain epoch of US history).

Starting from nothing, the players need to collaborate and organize themselves to improve their lot, continuously expanding westward in order to grow and conquering an hostile civilization in the process.

This requires building complementary buildings, harvesting resources, setting up an economy, exploring the land, defending from invasions and securing new land through military conquest. In every single one of these endeavors, the players have the central roles.

The geography, the location of resources, and the dangers posed by the wildlife and the enemy civilization set the stage while leaving the players in charge of deciding what goals to pursue and how to overcome the challenges they face.

Lots of improvements are planned along the following lines:
- Improving the visuals of the game (work is currently done on new character sprites with more animations and which show the equipment);
- Increasing the varitey of items, wildlife and abilities;
- Refinement of existing mechanics (battle, crafting, enemy civilization...).

Level Design Controls
The game looks great and I guess it will spark a lot of engagement in players.
One thing though is the controls. I guess it would be better to add arrow keys to control (can control both with the mouse and keys). Right now when a character walks towards a point, the camera moves with him and when I see some resources I want to collect, I try to click on them but since the camera is constantly moving there are many missclicks. Would be great if you could find a way to fix it as it can get pretty annoying.

All the best!
Reply
J

Thanks! Indeed improving the controls is high on my todo list.

Alternatively to keyboard controls, I'm considering the following: while the mouse is pressed, the player keeps moving towards the cursor and adjusts his trajectory as the cursor moves. He stops when the mouse is unpressed.

This would allow to precisely control when the player moves and stops, and therefore to stop instantaneously when you want to click on some resource or something. It would also allow some kind of "cruise" mode for long-distance trips, where you could simply keep the nouse pressed and simply steer it, instead of repeatedly click to keep moving. Let me know what you think!
Reply
s

Sounds like a good solution for the controls! I suggest to experiment with the keyboard controls as well! Combination in the controls might yield good results as well.
Keep it up!
Reply
J

Dear shokh,
A new version has been uploaded with changes regarding the controls.
Movement is still point and click, but it is now possible to unlock the camera and move it around freely, uncoupled from the player.
- Camera lock can be toggle with the space bar or by clicking the camera icon;
- Camera can be moved using WASD, arrow keys or by moving the cursor against the edges of the screen;
Feedback is welcome!
Reply
s

Hey! thats a great improvement!
The movement is much easier and friendly now.

Now I realized that the exit button in the UI is a bit confusing to find, maybe make it so that it would stand out and easy to navigate to without a need of looking for it?
Reply
J

You mean the door icon? If yes, then it's already on my TODO because I've had some feedback about it, coming soon! :)
Reply
s

Great! Waiting for that!
Reply
c

Game Graphics Tutorial/Learning Curve
Hi, Love the cute graphics. The thing I found confusing was the exit menu UI. The door to leave the menus is cool but if its not an X I feel like most people won' know its the way to leave the menu screens. Maybe put an X on the door sprite somehow. Also my first encounter with wolfs was a bit much right off the bat. I got surrounded by like 7 of them. Maybe If I could have just started with fighting off 1 or 2 wolves it would be easier. I died from them. Keep up the good work!
Reply
J

Thanks for the feedback! I'll see with the artist how to improve the door. In the meantime, I've already implemented the following changes:
- "Dangerous" species (like whie wolves and Arths) don't spawn in starting regions anymore;
- Wolf packs have smaller sizes in starting regions.
The game will be updated with these changes in a day or two. That feedback totally makes sense and ties in well with the whole theme of the game; essentially, the difficulty should increase as you go westward, and you should be safe in the east. ;)
Reply

Controls Level Design
The game looks bad and I guess it won't spark a lot of engagement in players.
One thing though is the controls. I guess it would be worse to add arrow keys to control (can control both with the poop and pee). Right now when a character walks away from the point, the camera moves away from him and when I see some resources I don't want to collect, I try to click off them but since the camera is constantly stationary there are many missclicks. Would be great if you could find a way to fix it as it can really improve if you restrict gameplay features.

All the worst!
Reply
J

Thanks, can you elaborate on what you find particularly ugly in the game? UI, characters, buildings, everything?

Indeed the controls emerge as a big sore point, that's one of my main action points in the short term!
Reply
J

Dear Ferguson,
A new version has been uploaded with changes regarding the controls.
Movement is still point and click, but it is now possible to unlock the camera and move it around freely, uncoupled from the player.
- Camera lock can be toggle with the space bar or by clicking the camera icon;
- Camera can be moved using WASD, arrow keys or by moving the cursor against the edges of the screen;
Feedback is welcome!
Reply
F

Game Graphics Controls
I've been following your development blogs for quite some time Jerome. I must say I am quite impressed by it thus far. I love the graphics and how you've pieced it together. I cannot play the game currently, but from the last time I played it, I found the controls a bit confusing. If I recall correctly, clicking regions is not as responsive and snappy as I was expecting.
Reply
J

Thanks for the kind words! I'm currently working on improving the controls, hopefully the experience will be better :)
Reply