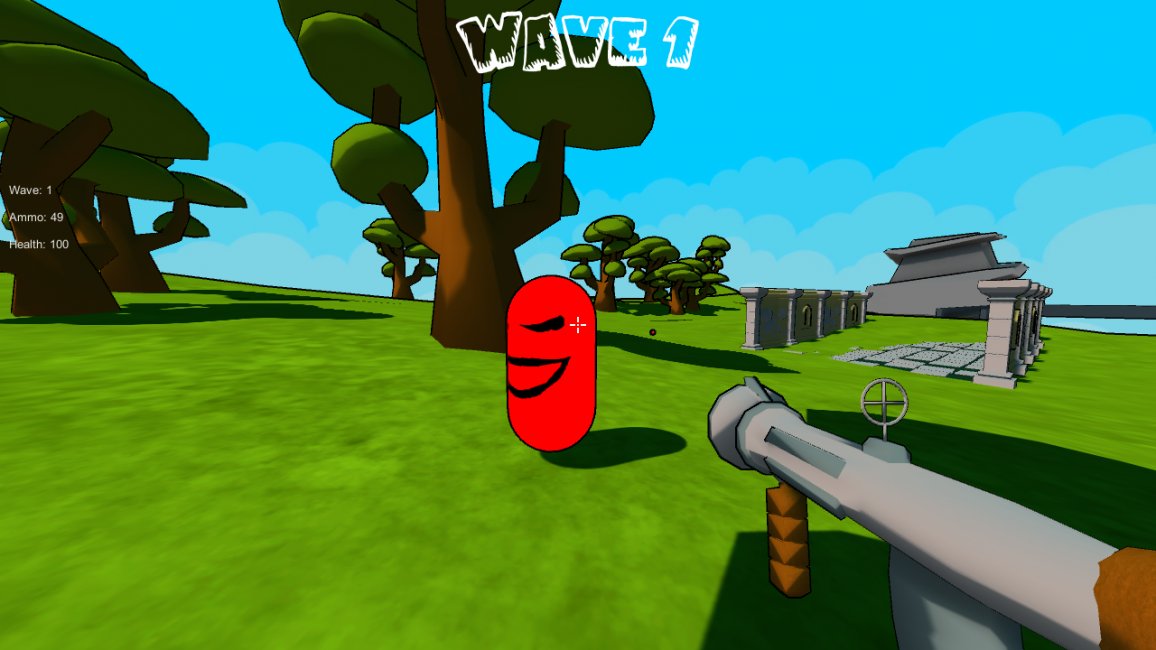 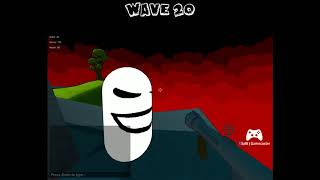 Battle the Skulls as they increase in speed and numbers.

Your rate of fire increases every wave! It starts slowly, but gets insane.

Up to 4 players per room. Max of 50 players on the matchmaking server :(

Can also be played as a single player game.

All dead players are revived as long as one player can kill all the tictacs in the wave.

Health spawns at fixed spots on the map. They are easy to find, just look for the giant green beacon.

When tictacs die they drop ammunition. Share this with your freinds as you don't want to run out.

The UI needs alot of work. You can see your health of the left side of the screen in very small writing. Ammo also. Not ideal I know.

There is currently no sound... I have made all this in the last 2 weeks :)

expect major bugs, especially with the networking. but it is stable enough to have good games as long as people dont leave and join like crazy.

Still working on a title as well.

Have fun playing and please let me know what you think :)

Controls Level Design
I soloed to level 15+. Can get hectic but the gun speed "upgrades" help. I like to low poly style. Going into the grey-colored bridges/paths are a death sentence. The roast:

- I got kicked out of the game once after a few seconds on wave 1.
- "Yes" on the quit dialogue box doesn't work sometimes.
- I figured out a way to jump on the wall and became untouchable.
- Enemies get stuck behind trees.
- Health spawns are a bit too high; I ran under one like 5 times on 10 hp while being chased by a horde.
- Sprint OP.; enemies can't touch you. Endless kiting is an issue.

Aside from the bugs, everything in the game is fine, even the simple/creepy look of tictacs. More features is all you need really to make this an amazing game! Tictacs that join together into a giant tictac boss? Bodies don't disappear on death so you can use as a wall? Tictacs that fight other tictacs? The possibilities are endless.
Reply

Thanks Yoshizzle for taking the time to play! And sorry for the late response... A lot of features have been added but it still has a long way to go.

Almost all the issues you raised have been fixed if you want to try again :)

Anyway thanks again for playing.

Game Graphics Mechanics
Here's a breakdown of what I think:

The graphics were simple but worked well with the style of the game - the low-polygon cartoons created a very playful atmosphere.
The sound effects were pretty good, but the lack of sound controls was frustrating because the music was way too loud.
Gameplay was mediocre, nothing too special. The hitboxes were atrocious and the pellets went straight through the enemies most of the time.
Walking felt useless because you could just hold the Shift button down the entire time to move quickly.
I was able to climb on top of a tree and avoid being hurt by the enemies (but still couldn't hit any of them because of the hitboxes).
The lack of control options was infuriating - how am I supposed to adjust my in-game sensitivity or find out the control scheme?

I would suggest that you fix the way the game 'feels' before moving on -the movement, the shooting, the hitboxes.
Reply

Level Design Mechanics
Alright, let's cut to the chase: I can't deal with the camera movement. My eyes can't follow the camera without wanting to take my eyes off the screen. Either it shakes too much, or the motion blur is way off (which I myself am not a fan of, sorry).

Gameplay wise... I understand the concept, but I don't like the execution. The concept seems solid, just shoot whatever comes at you, but I feel it lacks a mechanic. Sure, waves constantly get tougher, enemies spawn faster, but... What's the catch? Teamplay? It feels like an old concept with different graphics (zombies with different models). The map makes sense, but I really can't grasp the details with the camera the way it is right now. Change it, tell me, and I'll play again!

Controls... Too inconsistent. Seems to me they should be worked on a bit more.

Hey Nanuk, thanks for playing and taking the time to write the roast :)

Ok, the motion blur. I added it mainly to add some interpolation to the projectiles, which tend to move too quickly to look nice (IMO). But now I'm definitely going to add an option to disable it. Maybe adding FOV options? And do you mean the head bobbing while running is too intense? I will assume you do as I feel the same :)

And you are spot on about the gameplay. The project is as much a market experiment as anything else and the goal was simplicity. Having said that I feel very strongly about trying to make my products unique and engaging. This one still falls short of the mark and I am very open to suggestions :)

I am adding an 'aggro' mechanic but that will only affect gameplay when there are multiple players.

Controls are out of the box unity systems with some modifications. It is the plan to rebuild them from scratch.

I'm doing another release this week. There is new cover art, new player character and much more. I would love it if you managed to have another crack at some point :)

Thanks again for taking the time to play and review.

Controls Mechanics
Pretty fun. I played it with my friend, but I can't play it on my own for some reason. The game just won't let me.

Also I should probably say, me and my friend found out that fire rate doesn't matter, because you can just spam left click to fire faster.
Reply