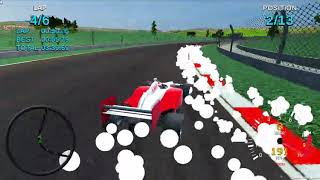 This is an unnamed racing game that I've been working on for a while. I used a couple of assets from the asset store within this project, mainly for the graphics (i.e. car, speedometer, and race track) whereas the AI was made by me.

Currently, this version cycles between 7 scenes, giving you 3 tracks to play in (tracks are reused). You'll also get to try out different cars within the scenes. The total playtime should be ~30 minutes.

Adjusted values of the car modifications
Adjusted friction (i.e. cars cannot drive as fast on grass)
Changed how cars respond to collision
Added drag/air resistance
Adjusted slip-streaming (much weaker when further away
Adjusted AI (faster and more aggressive)
Added music, both before the race, and during (will be replaced in the future)
You can now press V to skip a track
Adjustments to car stats
You can get a boost start during the countdown (check readme)
Smoke particles changed back to the toon smoke
Timer added

Mechanics Animation
Things I liked:
- Graphics
- Drifting sound is cool
- Camera shaking when collision happens
- Visual effects on Collision look nice, although I'm not sure if they fit the art style
- Sound effects in general (I think that engine sound needs some improvements though)

Things I didn't like:
- Weird and unexpected camera movements (camera was going up and down constantly and sometimes it was hard to see in front because camera was slowly moving down. I get that you were trying to make it more cinematic or something but I think you should make the camera position fixed and add an option to change it's position)
Reply
j

Thank you for the comment!
I'll make sure to add something to stop the camera from moving around so much in a later update. I also will be getting new engine sounds, but I'm not too sure on when.
Reply
g

Physics Game Graphics
I like the your playful graphics, but I think that it would be better if you fit your UI graphics and cars to that theme. Basically, your collision and drift art style seems different than the rest of the game. It would be nice if you could separate this game from all of the other racing games on the market.
Reply
j

Physics Mechanics
Bruh, this game has potential. Not from the perspective of the market, but from the perspective of a good game that complies with a standard. You only have a bit more to do like making the menu screen more polished, and overall making the game navigatable. I found out the game to be quite difficult to navigate. The A.I of the opponents can definitely improve.
Reply

I also forgot to mention the Camera. Another previous thread did mention it.
Reply
K

Sunday Driver is a game about avoiding traffic on a busy highway.    The controls are simple: swipe left and right to dodge the oncoming cars and other obstacles! Collect coins to buy new and exciting cars from the store! How long can you survive in this traffic madness?

Soon there will be a revolution, Mass transportation has hit the skies. "Pods" have taken over as the top mode of transport. The car is dead. Illegal racing is popular, and fatalities have soared. Fed up with these activities, authorities have run Pod racers out of town. They have taken to the deserts and oceans.   This arrangement has been working well, but a disturbing and deadly new sport is emerging.   They call it - Podageddon

A fast and furious arcade like flight simulator race game where you race in underground tunnels. A shield protects your racer and allows you to collide with tunnel walls, which is handy since you'll find it hard not to. However, your speed will be sapped significantly with each collision hindering your race progress. Non-lethal weapons are available to hinder your opponents, but good luck using them effectively. Tunnel Jet Racing gets so fast you'll be struggling to avoid bouncing around the tunnel walls.Full 3D tilt steering control.Download new race series from funferret.com as they become available.

This is my first attempt at creating a game. 2 days of work and a hope that at the end this will be a nice game.You are a piece of information that is trying to get to the processor, but the wanna cry virus is trying to encrypt you. Avoid the enemies and get to the end.EVERY SINGLE LEVEL IS POSSIBLE