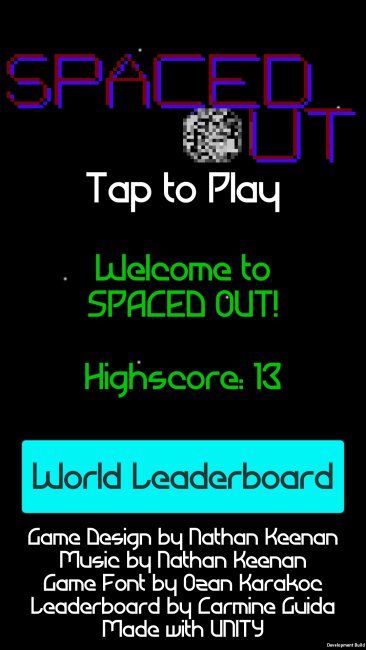 The ship's controls are failing, and you must maneuver the ship through a small tunnel in space. Easy enough, but try avoiding all of the asteroids and laser beams that are floating in space as well! And on top of all this, the ship's speed keeps increasing by the second! Fly the ship through impossibly tight openings and avoid the walls and asteroids for as long as you can!

- Enter a username to see how your highscores stack up against the rest of the world on the world leaderboard!

+ Made the walls on the sides of the playing area single objects instead of groups of multiple smaller walls, reducing CPU usage.
+ Spaceship movement is now frame-independent and hitbox is now mapped to the sprite, making the hitbox much more fair.
+ Added a starry effect to both the homescreen and the game screen.
+ Fixed a bug that allowed players to farm for points after hitting a laser and immediately watching an advertisement to receive invincibility.

+ Potential for more background graphics in the future, including planets or a nebula.
+ Powerups and ship upgrades might be very possible in the near future! Suggestions on the types of powerups or upgrades are welcome!
+ If ANYONE has ANY problems with the leaderboard giving you an INAPPRIOPRIATE NAME ERROR, and you feel that it was a mistake, PLEASE NOTIFY ME AT ONCE WITH A DETAILED EXPLANATION OF WHAT HAPPENED BEFORE THE ERROR OCCURED!!! This was a last-minute feature that I implemented so that younger players could hopefully play the game without any inappropriate names appearing on the leaderboard.

Mechanics Level Design
Wow, what a hard game I almost made it to 7 points to reach the world leader board, which is a very nice feature.

Although the graphics are simple they are consistent but I think you can improve a lot. Adding a paralax map does wonders and is pretty easy to do.

Gameplay can be improved perhaps by some bonus pickups. It's currently too simple imho.

Way too many ads, I liked to try a couple more times but watching a ad every couple seconds (Yes I died a couple times at the first barrier) made me stop playing. Implement a timer that either counts the amount of games or the time and show an ad only after x amount of time.
Reply

Cool, thank you for your roast!
Reply

I went ahead and fixed the ads, since that seems to be the biggest issue (and the easiest one to solve). I have some ideas in mind for powerups, so maybe I will end up adding some. I looked into the paralax map, and it seems to be designed specifically for 3D games (correct me if I am wrong). Either way, the graphics are meant to mimic 8-bit ones, so I am hesitant to implement complex graphics more for the sake of loyalty than for complexity. However, if the graphics become a big issue, I might reconsider my position on that as well.
Reply

I'm talking about the old school parallax background that gives the impression of depth in a 2D game. You can add multiple tileable backgrounds and let them scroll at different speeds. The closest background would move fastest and every background behind that moves slower. Here is a article about it: https://gamedevelopment.tutsplus.com/tutorials/parallax-scrolling-a-simple-effective-way-to-add-depth-to-a-2d-game--cms-21510

You could put a nebula in the front, then some planets or asteroids and a starfield in the back. Tone it down so it does not interfere with the actual game elements too much.
Reply

Hm, okay. Thanks for the suggestions! I have never heard of the term "parallax map" before, but now that you explain it, I know what you are talking about.
Reply

I am amazed at how little people know about game development and still manage to develop a simple yet fully functional game. I started game development 8 years ago but only managed to complete a couple of games, so good job!
Reply

Lol, thanks, I guess.
Reply

Controls Game Graphics
Took me awhile, but I finally scored 8 points! I like that you've implemented a leaderboard. I also thought the music choice matched the type of game this is. The graphics are simple and I think it could use some variation the further you progress within the game.

After a few playthroughs I felt as though I didn't have much of a reason to come back. Maybe adding more to the game would spice it up, such as different ship types, power ups, etc. The game mechanics are simple, so I'm curious as to how you would achieve a more complex game with the current mechanics. Also, the music loop for the main menu seems to be a little bit off timing wise.

The core game is quite good, the only issues I have:
-the hitboxes are a little too unforgiving, some may think they died by touching air
-the randomness is left with too little control, which may sometimes corner the player into the instant loss. The most jarring example I've experience was when two overlaping stones ganked me at the exit of the wall, covering both ways out, forcing me to crash

I was trying to achieve a score worthy of global high scores, but I've got the "inapropiate username" strike, like, five times in a row and I just gave up.

Okay, someone else also commented on the hitbox accuracy, and I'll be sure to look into that. I have modified the asteroid algorithm before, but I agree that it could use some more work. However, could you please elaborate on the inappropriate username incident? That was a last minute addition, and I was hoping that it wouldn't malfunction. In fact, you are the first person to report that you have had a problem with it.
Reply

Sunday Driver is a game about avoiding traffic on a busy highway.    The controls are simple: swipe left and right to dodge the oncoming cars and other obstacles! Collect coins to buy new and exciting cars from the store! How long can you survive in this traffic madness?

Soon there will be a revolution, Mass transportation has hit the skies. "Pods" have taken over as the top mode of transport. The car is dead. Illegal racing is popular, and fatalities have soared. Fed up with these activities, authorities have run Pod racers out of town. They have taken to the deserts and oceans.   This arrangement has been working well, but a disturbing and deadly new sport is emerging.   They call it - Podageddon

A fast and furious arcade like flight simulator race game where you race in underground tunnels. A shield protects your racer and allows you to collide with tunnel walls, which is handy since you'll find it hard not to. However, your speed will be sapped significantly with each collision hindering your race progress. Non-lethal weapons are available to hinder your opponents, but good luck using them effectively. Tunnel Jet Racing gets so fast you'll be struggling to avoid bouncing around the tunnel walls.Full 3D tilt steering control.Download new race series from funferret.com as they become available.

This is my first attempt at creating a game. 2 days of work and a hope that at the end this will be a nice game.You are a piece of information that is trying to get to the processor, but the wanna cry virus is trying to encrypt you. Avoid the enemies and get to the end.EVERY SINGLE LEVEL IS POSSIBLE