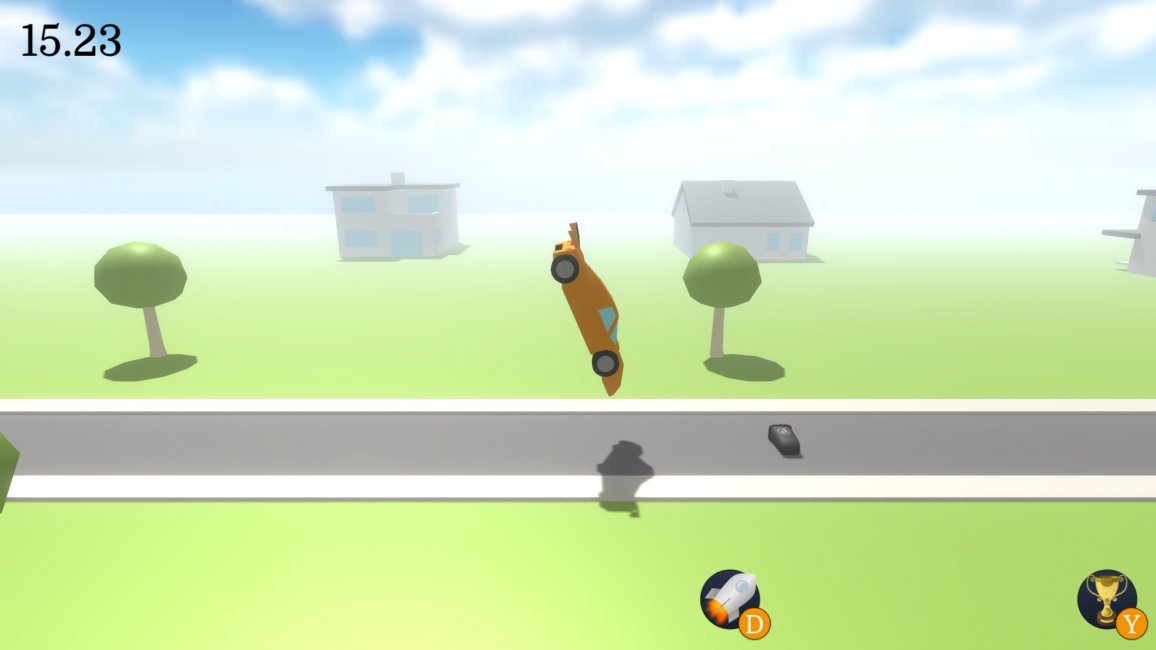 Get ready to crash your car in this ramptastic game as you send your car hurtling towards victory! Buy upgrades to pump your car up and send it farther and faster into oblivion.

Mechanics Animation
Car Launch is great! Super clean and simple--seems like a perfect mobile game, though I have been grinding the PC version for the past hour or so! Super clean and simple, great UI, well balanced upgrade system...diverse attributes to upgrade, Great Sounds! Seriously, for what it is...9/10! Having a ton of fun! Thanks! Any improvement to 'Boost' sounds/animation would help but isn't entirely necessary- great build! Personal best is 1.47km and everything up to about lvl 14 at the moment!
Reply

Meant to say 'solid and sturdy' there instead of repeating 'Clean and simple'--still playing, mind is wandering!
Reply

Thanks! I'm glad you like it! I'll look into getting some sound and an effect for the Boost in a future patch.
Reply
j

The game seems to be too similar to the flash games which involve you crashing, getting hit etc. then free falling, but it seems like there's more obstacles, and well, more to it than this game. That's not me saying that it's a bad game though, just that it should have more to separate itself from other games.
Reply

Thanks for the feedback!
Yup.
Personally, I wanted to make a 'complete' game quickly and test out some of my libraries. If I were to make a version 2.0 of this game, I would add some more obstacles (especially in the air), more upgrades and create more varied areas as your car progresses.

Animation Level Design
This game is pretty good and all, but the only that I would like you to add is more vehicles! Thanks!
Reply

Mechanics Physics
This game is great, but I have one big gripe with it: the bounciness causes the car to leap and jolt unrealistically. Now I understand this game isn't exactly supposed to be a simulation, but the jumping and skipping is really noticeable and at some points makes the player have a disadvantage (For example, having to boost to avoid flipping on the ramp). Great game though! Another gripe is secondary but noticeable - please add more music and more variety in general. I loved "the void" because it made me wanna see even more of the level. But then there was nothing much after it for a while. Please spice it up!
Reply

Thanks for the feedback!
The bouncing/skipping on the ramp is not intended and kinda sucks. Once I find a good way to get rid of this, it'll be gone. The car's physics aren't really exact, and will probably stay somewhat 'goofy'. Spicing it up will be next on the feature list. There is a lot of more variety with obstacles and new areas that I could put in the game.
Reply
V

I definitely think I'll come back again and again to this game by the way. It's amazing and I love it!
Reply

Tutorial/Learning Curve Physics
Simple yet addicting, I think it would benefit form some more seance of progression, maybe unlock new upgrades, a personal best marker. What bothers me the most is the bounce at the takeoff, at least before you get access to a high enough upgrades to exploit it ;). With that and some bigger obstacles I could probably play it for quite a while. Also, would be fun if the boost was always relative to the car, it would add another skill aspect where u have to time the boost with the cars rotation.
Reply

Thanks, a personal best marker seems like a good idea!
Ya the bounce is garbage... If I get to a 2.0 of this game more difficult obstacles are definitely on the menu. I'll have to look into 'skill boosts'. It is a good idea, but currently the boost mechanism can used for getting unstuck when upside down. So I'd want to find a replacement for that functionality first.
Reply

Thanks!
Ya the game could use some animating.
Reply
w

Level Design Mechanics
all around great game, I personally like the simple animation but things are quite expensive early game
Reply

Thanks!
I'll take a look at the cost curve when I next fiddle with the upgrades.
Reply

Level Design UI Graphics
I've definitely seen this style of game before, but the core loop maintains it's addictive nature. I played for much longer than anticipated. I would've liked to see how many boosts I had left at any given time, and I think that some background elements near the runway would make it feel better (not so much watching a number on an unmoving screen), but overall this was a fun game and it managed to hold my attention for something like forty minutes during a busy day. Nice job.
Reply

This is a fun game for when you have nothing else to do I play it on my android phone all the time and it is so fun and if any devs want to join this discord chat looking for good devs I am a one man team right now and want to get at least 10 devs in this group and make games together. https://discord.gg/xSGCHPr
Reply
j

Mechanics Physics
I went through Roast My Game and saw this one, so I decided to play it again. If you are to ever update the game again, you should adjust the game so that the car doesn't bounce around at the beginning when you increase the bounciness, and so that it's easier to go onto the ramp without boosting. As of right now, the front of your car collides with the ramp, causing the car to flip a little, which can mess up your jump.

I think if the game had more particles upon collision, maybe even a different trail renderer for the boosting, it'd look a lot better, which will help with playing the game for longer periods of time (here's a pack that you could use: https://assetstore.unity.com/packages/vfx/particles/epic-toon-fx-57772). It could maybe use some sounds, although I'm not too sure on where you'll find any good ones.

So overall, improving this game would be polishing the physics so that the car doesn't bounce around, improving the aesthetics, preferably with something that matches the game (you may also want to improve the graphics, here's a toon pack that you could use: https://assetstore.unity.com/packages/vfx/shaders/toony-colors-pro-2-8105), adding more sound, and making the game harder as you progress, maybe with different enemy types (I've only seen the car and the bin). I'm not too sure on how long the game goes on for, so I don't really know if anything comes up next.

Hopefully you do get to read this, since I don't think people use this site as much as they used to.

Game Graphics
amazing and addicting game! been playing for an hour or so now and am enjoying this game very much, a solid 9.5/10 from me. only thing i could think of to improve is having a hover pop-up to tell the user how the upgrades will help, most of them are self-explanatory but things like friction, bounciness and earnings confuse me a little.
But car launch is an amazing game and you should be very proud of it.
Reply

Game Graphics Physics
The game looks fine, but I don't understand what to do, every time there's a jump at the beginning, it makes a strange jump (the rear wheel) and it stops before I jump. It's strange and I don't know what to do. How is the game controlled? just the W key? It takes some work with physics.
After the game I see that I buy something in the store, but I can't find the buton to close. I think I have to pay real money for the upgrade. but it's about virtual money, that's good to know.Good luck. This game looks very nice otherwise Bob.
Reply