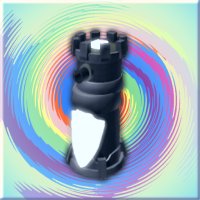 Get ready to crash your car in this ramptastic game as you send your car hurtling towards victory! Buy upgrades to pump your car up and send it farther and faster into oblivion.

Play as this barbarian guy as you travel the land slaying monsters, getting epic loot and reaching max level. Use your mighty axe and several spells learnt along the way to decimate your foes in this non-stop action role playing game.

Voxel based adventure game where you craft items, research tiers of technology, mine rare minerals, explore and have fun! This game is in development so I'll be ironing out wrinkles and adding more features. I'm eager for suggestions, tell me how I can improve the game!

Cool game, I liked the premise! I also liked the atmosphere and the world was fun to explore.

I found that it was difficult to get my character to move like I wanted them to.
Also the cursor doesn't stay locked to the screen.

I got to the point where I destroyed all the towers except the one near where you start.

If you press a button on the elevator to a floor your character can't go to, he walks to the button. Then he is standing in front of the elevator buttons so you can't see them, making it a little hard to pick a different floor (without walking elsewhere in the elevator).

Thanks! I'm glad you like it! I'll look into getting some sound and an effect for the Boost in a future patch.

Thanks for the feedback!
There is not much roleplay. Story, Customization, and Character choices had been put on the back burner while I was getting internal systems figured out, and the items. With luck I'll be able to add some classic roleplaying elements to the game in the future. The game is designed to be more Diablo or Path of Exile than Dungeons and Dragons though.
I just released a new patch that hopefully fixes some of the issues you mentioned. The Hero was getting in the way of clicking enemies, so you would click him instead of a monster and he would decide not to attack. I think that was the problem with clicking on enemies failing to work. The cursor now also changes to an axe when hovering over enemies so you know its good to attack.
The item stats have two modes a simple and a normal mode which can be toggled in the settings. In simple mode it only shows offence, defence and healing, in normal mode it shows all the stats. I'm not sure if you meant they didn't vary from just seeing the simple mode stats? Either way the default is now normal mode (for new players; you will have to change it in settings)
I'm a programmer and not a modeller so unfortunately the items will not be represented on the character model for awhile. The story and roleplay elements will probably come first.
The UI panels on the left shouldn't overlap anymore (except the reward popup). You could always disenchant unused items by shift clicking, but I didn't make that clear anywhere in the game, it now tells you as much in the inventory. I also increased movement speed and the bonus that movement speed points give.
Thanks again for the feedback, and if you memory improves, I'll endeavour to fix the those many, many little mistakes too.

Interesting game!
The echo location mechanic is fun and the blue/red offset mixed with the beat is cool. The game is also simple (yet difficult) and there is next to no learning difficulty.
The visual red/blue thing did start to hurt my eyes though. I'm not exactly sure what you would do to fix that. Movement was annoying around corners. If you ran into a corner you abruptly stop moving. It feels like the corner should just slide along the circle pushing you outward so you can continue. I don't know if this was intentional as to be difficult, but it sucks. Also there are no settings for changing the volume, although that probably is not a priority in a game jam.

Thanks for the feedback!
Yup.
Personally, I wanted to make a 'complete' game quickly and test out some of my libraries. If I were to make a version 2.0 of this game, I would add some more obstacles (especially in the air), more upgrades and create more varied areas as your car progresses.

Pretty cool game!
The small special effects on weapon pickups, your weapon fire and when bullets explode all look great. The movement and controls feel right and the sound effects are good. This game looks like it will be great when finished!

There are lots of little issues though
- I don't think the HUD scales with resolution, it seems off in 16:9
- The back of the starting area constantly flickers
- There is no explanation of what any of the numbers mean or what I'm supposed to be doing
- The text below your character 'wobbles' when you move
- It feels like I die for no reason sometimes
- Some objects have a Toon shader and others don't
- There is no map and some areas are just 'open' so you kind of lose frame of reference
- The enemies shoot at me before they appear on screen
- The enemies also shoot at me when there is a wall between us
- It lags when you die
- The sound effects in general are laggy and cut out sometimes
- I personally find the zooming while moving thing annoying, but that might be my problem

I had to figure out the controls, which took me longer than I'd like to admit. I still don't know how to enter a top score. Also the 'enter score' text doesn't go away but I can still play afterwards, is this intended?

I can run around and there is no point, just as advertised!

Ya you can fall off the level, and then you have to reload the page. The 'story' at the top needs commas or something. I don't know how to get to the next level other than through the editor. Also you can jump if you are up against a wall.

When you right click, the titan's head disappears for a few frames. Also the frame rate on the titan seems kinda low.

It is difficult to remember every time what you need to do and/or execute the moves correctly, and that lead to a lot of frustrated restarting. A checkpoint in the middle might be a good idea.

The controls were awkward to use. Clicking things to interact with them seems natural, pressing enter is weird. I accidentally toggled my flashlight when trying to interact with things a lot. I didn't realize the computer would give me password hints until after I watched the trailer for clues (since I got stuck) and then went back to the game.

I liked the funny text, and the green square's death animation.

Falling down a hole sucks, I don't know how to get out or reset my position, so I had to restart the game. Also it was a little short and I think you just fall forever at the end?

Thanks for the feedback!
The bouncing/skipping on the ramp is not intended and kinda sucks. Once I find a good way to get rid of this, it'll be gone. The car's physics aren't really exact, and will probably stay somewhat 'goofy'. Spicing it up will be next on the feature list. There is a lot of more variety with obstacles and new areas that I could put in the game.

Thanks, a personal best marker seems like a good idea!
Ya the bounce is garbage... If I get to a 2.0 of this game more difficult obstacles are definitely on the menu. I'll have to look into 'skill boosts'. It is a good idea, but currently the boost mechanism can used for getting unstuck when upside down. So I'd want to find a replacement for that functionality first.

Thanks!
Ya the game could use some animating.

Cool game!
The gratuitous particle effects are great! The controls played nice and smooth. I liked the variety of enemies.

When you retry after a game over there are a few bugs. On my first retry, my ships speed became very very slow. It was still moving but it probably would have taken 30 seconds to get from the middle of the screen to an edge. Then after when I died, my ship respawned below the screen. After exiting to the menu and trying again, and getting another game over at the boss (I am awful at arcade games) when I retried the boss was still there along with the rest of the level. Also as a minor thing, the vertical bounds your ship could move in seemed a little small, especially when trying to evade those cool sideways missiles.

Thanks!
I'll take a look at the cost curve when I next fiddle with the upgrades.

It let me keep playing, but the ship was still moving very slow so it took me like 10-20 seconds to get back onto the screen.