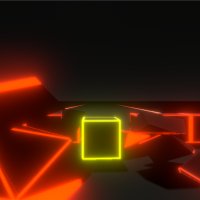 Beat the track in your own way, using multiple abilities and their multiple combinations

Arena shooter where you have to buy and upgrade weapons to get to higher waves. There supposed to be more in it, but project got corrupted and said bye-bye, so I thought I will just post it the way it is. Still, feedback is welcomed, because I will be doing in the future another top-down shooter.

I love the simple graphics. Jumping back when you hit the side is pretty cool too. Maybe a little variety is blocks you jump on would be nice.

Can you tell me what you don't really like about UI?

alt + f4 came in handy. I want to know what's the point of this game, what were you trying to accomplish in it.

Love the retro graphics, but just like vladyslu I didn't really know what I have to do, the tutorial text disappears too quickly, enemies scaling is off, some are so big that you can see blurred pixels, guns feel out of place and movement is pretty messy.

and some enemies you can't see at all

Shooting with weapon feels really weird, I don't really understand why I couldn't shoot while charging a little longer. Shooting became a deal breaker for me, so I didn't play for that long, but you really need to work on it

How do you even boot up this game? After opening the folder with the game I can't find any executable to run it.

Downloaded it from gamejolt

Love the look of lasers. Health upgrade (the one that gives you new container) is pretty useless, because it doesn't give you the hitpoint (or I just lost it the second I got it). Some "higher" guns are just downgrades (the one that shoots in bursts, and the another one that you can choose with it), couldn't really feel that I have passives, levels are kinda meh, sound effects are okay, only the menu music I didn't really like.

Pixel art looks great, but why do you die when your mood reaches 0? At least give me a warning that if I do any action that will consume mood when I have mood around 10 I will die. Music is good too.

Peeking mechanic is done pretty good, I like how you still have some time after being detected to kill a guy. Melee can hit through walls. Enemies can sometimes see you through half walls. Last seen icon is pretty random. Everything lacks impact, and clarity for my taste. Like it doesn't feel satisfying to kill a guy undetected, killng a guy using a gun doesn't feel satisfying as well, and that red bar isn't a good indicator that you're crouching. Going gun blazing feels more like a bonus than a main mechanic, enemies hit you right away when you're in their line of sight and that's a no-no because you can't avoid getting damaged, and nobody likes to get hit in stealth games. Holding the melee attack is useless and I do understand why it's even in the game. Why the game isn't resetting by itself after player death? Yeah, so you need to work on that graphics, but I bet you know that already. All in all pretty okay game

https://www.kongregate.com/games/RAC7/stealth-hunter-2 you could use this game as reference

Rotation of the cube is just another way to indicate that you're colliding with objects, it's purpose is the same as sound effect. About movement, I feel that snappy controls wouldn't really work in this type of game.

But thanks for feedback nonetheless.

Thanks for making a video about my game, that was very cool from you, and thanks to that I found that the bars for abilities are bugged, and I should making it clearer that the perks are only perks, they are supposed to enhance the abilities and aren't ability themself. As for invitation to jam, I'm sorry but I work pretty slowly on the games, so I wouldn't be able to meet the time limit. And the game is similiar to cluster truck because I was taking inspiration from it. And as for level system, currency to buy upgrades and etc. I didn't really wanted to make a saving system for those things as this game was just a side project, but maybe in the future when inspiration hits, I will make it.

But thanks for feedback and good luck with the jam.

My dude, you should really check the "Edit Downloads", you can place links in there so it's easier to find.

Would be useful to see the range of police, infection, etc. Most of the time I get fined while walking on orange path, and policeman is rather close and you can't really "dodge" him, that was rather frustrating. You can't really see the text that shows up after your death. There should be a timer on workplace, and I don't really see. The way policemen are right now I don't see a way to beat this game, you're just randomly getting fined.

I really like the idea of not being able to walk on green path. I will look out for the updates.

Oh yeah, and the tutorial text wall is rather off-putting

Woah boy, you can see the passion put into it, but it's one clunky and buggy mess (on my first try the boss didn't spawn at level 1 and because of that I was stuck on that level). Not gonna lie I only tried this game because of those paint paintings, and I think that your entire game should be made using that art style. Enemy AI is a non-existent, they get stuck almost every single time, some won't even agro to the player. I highly recommend you checking out nav mesh, and reworking enemies so that they are using it. Remaining enemies counter would be really good. I don't see the point of going inside the buildings when you don't really have to avoid the enemies to survive. I don't know if it's a bug, but there are no sound effects in the game, only music. Leves are unispired and boring, most of the time enemies get stuck on those buildings. Enemies are boring. I don't really feel that moving text, it's more distracting, than good looking.

Minor problems:
-Music on mission 4 is really bad.
-bullets from chicken altilery are colliding with the chickens.

So you used FPS Microgame as base for your game, but you didn't add anything to it other then making some rooms and adding shit ton of enemies in them. Highly disappointed.

What are the things you don't really like about UI? And do you have any suggestions or ideas how to improve it?

But thanks for feedback nonetheless.

https://www.youtube.com/watch?v=vFsJIrm2btU 1:10, check this video out and implement trick number 2, it will make game feel a lot better to play

Couldn't really say that in the game because of corrupted project but, there is saving in the game (just don't use alt + f4).

I can't, project got corrupted, this is the latest version I built before it happened.

I don't understand how you made it weight 1.1 GB, when there is almost nothing in the game. Grapple works pretty meh, wallrun doesn't even work I think, lava should be just a rising plane and under her you use shader, pretty much the same thing as underwater shader, and not instantiate shit ton of cubes. Some builds have missing models I think. You should make a indicator for a player to see how far they can shoot the grapple, and the game is too easy.

Cool idea but it needs a lot of work and optimalization, because 1.1GB for something like this is a joke.

Oh yeah, I forgot to add that you can't restart after dying, menu from clicking M doesn't show up, so it may be a bug. And I think more stylized art style would be a better fit for this game, because hyper realistic one doesn't sit too well for this type of game in my opinion. I think low poly art style would be a perfect fit.

And I may sound harsh, but I really like your idea, always wanted to play something like this as a kid, so keep on developing and give some good ass game in the future.

Yeah, after watching vladyslu, I can say that it is a bug, the death screen just doesn't show up and I have to alt+F4, because there is nothing I can do, on the download I'm playing

There isn't anything to record, it's just that the game over screen doesn't show up, and you're stuck thanks to not being able to respawn.

I was about to see if the bug is on 0.3v but you need to have permission to download it.

There are no levels, it's just one long track, and if you're having problems just use slowmotion, I made it pretty overpowered, so that it could be used as easy mode in a sense.

Now we are talking, from 1.1GB to 255MB. Those blocks that kill you at the end, are unecessery and make me want to quit the game. I don't like how grapping resets your velocity, and just make it so that you can't use the grappling if you're not in the range(don't reset the cooldown, just make it so that nothing happens when you're out of range), because as a core mechanic in the game, it's not really fun to use the grappling gun. You should check out dani's videos about 3D fps (https://www.youtube.com/watch?v=rb0EhmyQ0aM&list=PLYCF9m5Atk1eWUtwekx8auskpW48bioqh), because there are many similar mechanics in those videos to the ones you're making. Rainbow puke doesn't sit well with me, I think cartoony lava would work better. Dash works more like a boost, than a dash. Platform is pretty useless, and I don't think it's working properly. Jetpack is stoping at 1%, so you lost two zeros. Shotgun is really bad, too weak and why do I have to look infront to make it work? Why teleportation is a raycast? The way it works now makes it just a worse version of grappling gun. Why can you go down in anti-gravity???? It should be named lower-gravity. I won't be commenting on map, because I can cleary see it's for testing purpose.

To sum it up, I don't find grappling gun fun, abilites fun, movement fun(it's just spamming jump next to wall)

But keep up the good work, and I will be looking out for the future updates.

Thanks for the feedback, but what do you mean by "breaks" for the player? And I agree that maybe I should have added even ealier something to encourage players to use abilities, but I disagree with there being a need for tutorials for those abilities, I implemented them the way I did, because in my opinion it's more fun to find out what ability does what, and what is the best combination of those abilities.