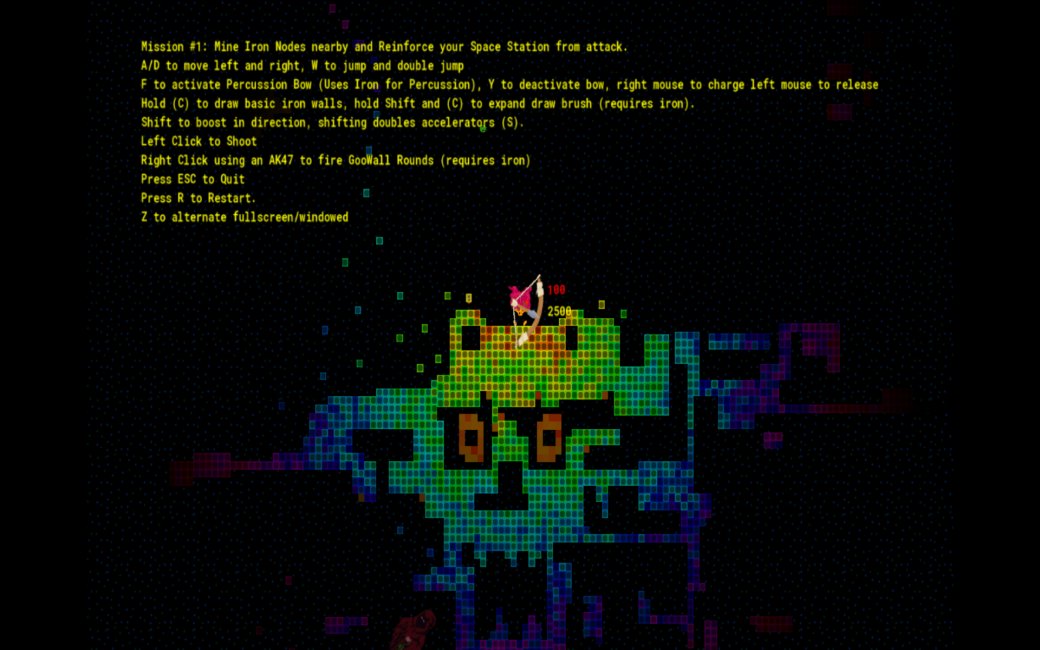 A physics-based survival space shooter that puts you in an open space star system where you must defend your Space Station from Swarms of Amoebic Termite Goop. Survival depends on effective reinforcement of your station with Star Harvest's pixel accurate destruction. Mine for materials, craft blueprints, weapons, gadgets, Modular Rocket Packs and Accelerators, and more.

Hey. I just made a video with a couple of games and decided to add your game there. I think that your game feels cool. However, I did not get what exactly I have to do. I think that it would be cool to add some tutorials. Also, I could not shoot for some reason.
https://youtu.be/6e2ofQ4Jx1I
Reply

Thank you ill check it out! Thanks! Yeah the game is very early it'll be an open game about mining ores, crafting defenses and weapons and surviving in a procedural growing star system infested with aliens. I agree I need to split up that wall of text and make it gradual. Ill look into that bug try redownloading the latest build just reworked a lot of systems.
Reply

Game Graphics Mechanics
Love the retro graphics, but just like vladyslu I didn't really know what I have to do, the tutorial text disappears too quickly, enemies scaling is off, some are so big that you can see blurred pixels, guns feel out of place and movement is pretty messy.
Reply

and some enemies you can't see at all
Reply

thank you i have implemented on most
Reply

most of this'
Reply
H

Hey CWEDD2000!
My initial reaction was I was pretty overwhelmed. There's a lot going on, player isn't sure what to do, lots of visual clutter and much of visuals are unintuitive. Eg lots of enemies are flying around and there's little numbers (coordinates?) next to them, your ship is slowly sinking into the ground, there's a fair bit of tutorial text, big planet sprites take up a lot of screen space, nearby terrain is colored red for some reason, etc. Obviously in a full release you can do a tutorial for all this, but even in a prototype this needs to be better.
The camera is also a bit confusing at the start-it kinda squishes/contorts until it settles? It's a bit of visual flair but I found it a bit annoying.
Tutorial text currently hides behind terrain-needs to appear above it (or else you can't read it). Also can't just stay above player, as when player jumps, the text jumps too and it's unreadable.
Control scheme feels unintuitive-player holds W to dig downwards and SpaceBar to jump. Think it should be S to dig downwards and W to jump.
Player feels quite large compared to terrain, making it difficult to move/dig exactly where you want.

Hopefully that's useful, pls give feedback on my project :)
https://www.roastmygame.com/game/project-t

Thank you this is very helpful.
Reply
d

You mean player foot contact with ground or the destruction? or in general?
Reply
c

Game Graphics Game Graphics
Bit too retro for me. But yeah it's alright.. Solid 6/10.
Reply
G

Game Graphics Animation
Pretty good. I like the gameplay a lot.
Reply

Level Design
Nice update. I love how it looks now. Keep up the good work.
Reply