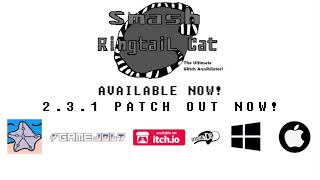 Don't Play Around With The Glitches, Be The Ultimate Glitch Annihilator!

Available Now on Windows, and macOS!

The Ubuntu port is TBA!

Level Design Mechanics
Bugs - There were many many bugs I encountered here I will list them off as a list and how I encountered them and how I managed to become free of them when playing.

Stuck in place after jumping - I would jump into a wall or corner and become stuck in place, still able to move the sprite left to right but not the character. This happened most the time too when wall running. Nearly all walls caused this bug to happen. I was able to move again by either crouching or attacking but was never consistent, I would have to spam to move out.

Infinite wallrunnig at spawn - I could infinitly run at spawn up the wall and teleport back to where the level began.

Stuck in wall running animation - Somtimes when coming out of wall running the sprite would stay horizontal and continue to animate after a few seconds.

Stuck in hit animation - after hitting the punching bags when really close to them I would take damage and stay in the damage hit state but be able to do everything normally.

Jumping boss path would change when hitting wall - title says it all.

Out of map - I could reach areas where enemies would spawn and ambush which causes me to restart the level. Maybe remove this or make it harder to reach.

These were the bugs that stood out the most but mostly animations would play wrong and certain tilesets didn't match or connect properly.

Level Design - The layout of the levels were really nice a fluid (ignoring the bugs) allowing me to push forwards and only needing to stop when attacking, the constant ability to push forward reminds me greatly of sonic.

Enemies - Being able to tell the difference between the enemy types was great, I quickly learnt brown enemies took 1 hit and the pink took 3, and the ranged enemies stood out nicely.

Art Style - Despite the MSPaint look of the main character and enemies I like what they're going for. I personally think the whole game should be of the one art style that is shown through your characters instead of the selected assets for the levels.

Music - really enjoyed the upbeat fastpaced theme, I felt like I had to push forward and never stop.

Overall I see potential but a lot of work will need to be put in to make something good, good luck!
Reply

Thanks for the feedback! We will update the game ASAP when possible.
Reply
t

Mechanics Animation
seeing from the trailer, you still have the problem that your enemys are always facing to the left even when walking to the right. to fix this go to the enemys 'begin step event' or 'end step event'
(where you have your code for flipping the sprite)and replace what is there to this:
'
if hspeed > 0
{
image_xscale=-1;
}
else
{
image_xscale=1;
}
'

this would fix that the baddies doesn't animate when walking too, this fix applies to every smash ringtail game

Thanks for the feedback!
Reply
t

-Don't use game maker studio's defaults particles SHAPES, they are too generic, not customizable, and don't look good with your art style, Instead use your own sprites particles.
here is a tutorial on how to set up your own particles
https://www.youtube.com/watch?v=DOKrIAn2z_Y&ab_channel=1upIndie
(if you follow this tutorial, don't use part_type_shape, instead use part_type_sprite)

or you could look up the manual.
it may be hard to understand at first look, but in the end it's worth it. and looks way better


-when you pick the invinsibility power up, smash looks bugged in a static sprite. this is because you choose the wrong way of handling this power up. Don't change the sprite for a static one.

instead there is two correct ways of handling it that i know:
1)If you wanted to have smash half visible, you could have changed the alpha with
image_alpha=0.5 //

2) OR you can use a colorful shader like the one showed here
https://developer.amazon.com/blogs/appstore/post/acefafad-29ba-4f31-8dae-00805fda3f58/intro-to-shaders-and-surfaces-with-gamemaker-studio-2

-smash having a silhouette/shadow all the time looks weird, in other games like sonic or megaman, silhouettes are only used to represent high speed movement and only used in those moments,

Thanks for the feedback! I'll improve on those things before the Story Beta gets released!
Reply