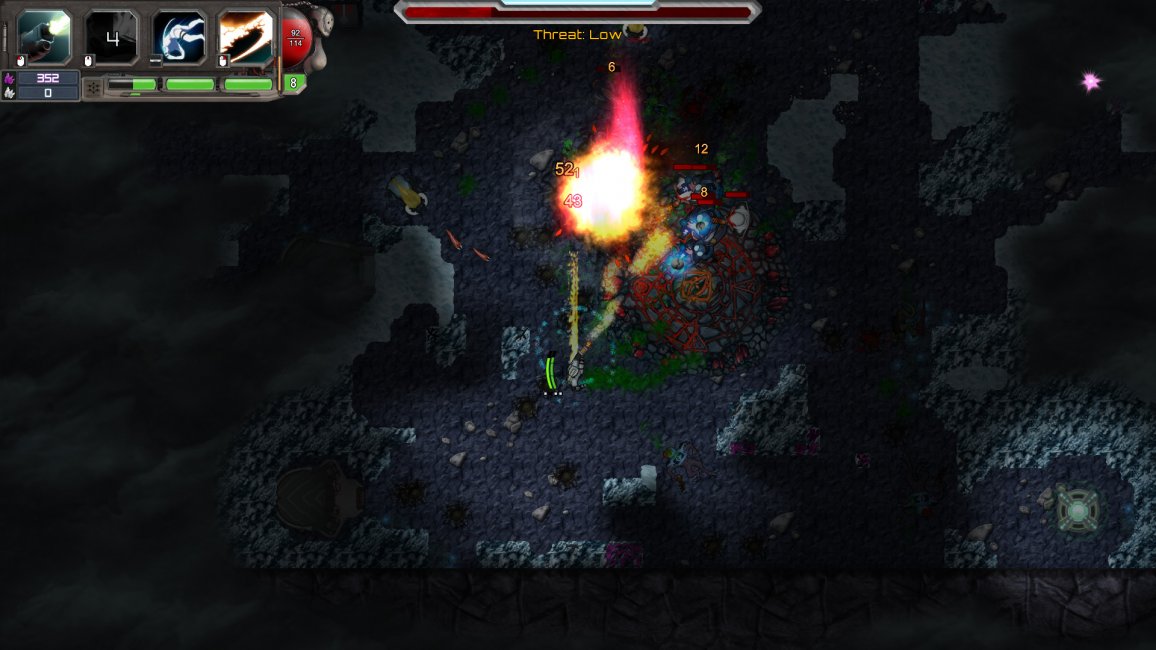 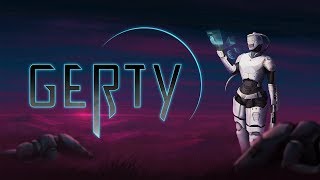 You are a member of an elite mercenary group. A mining colony of critical importance has become under attack by a hostile alien force. Armed to the teeth and equipped with your trusty laser-diggers, you must fight your way to the depths of the planet, find the source of the alien threat and eliminate it. Will you make it out alive?

Gerty is a top-down rogue-lite twin-stick shooter with a fully destructible environment. Carve your own path through replayable procedurally generated levels and create tactically advantageous situations to eliminate the alien threat in intense, tough but fair, action-packed gameplay. Excavate Juice crystals to upgrade your gear, discover alien structures, and eliminate the source of the alien threat in singleplayer or local co-op mode. In Gerty, the player explores the caves of distant planets and fights for survival through the monster-filled levels. The goal of each level is to get to a hidden teleporter that'll lead the player to the next level.

Controls Game Graphics
I've already spoken you about this game and I really love the concept of it.

I mean its so old school in some ways and I do like that I can upgrade so much, especially my character, as I see him/her/it growing.
This is the thing with this game, and the digging is great, and the enemies are some pretty hard to kill but mostly I've enjoyed the game a lot.

However like I said. Please. Graphics, you really need to work on them as for a 2016 game I think a lot would agree it looks like its from 2000 MAYBE.

I am a bit harsh and yes I do not expect Crysis 3 Main Menu or UI, but I do expect something that is appealing to the eye. That's all I'm asking.

Keep it up
Reply
t

We recently managed to catch a new artist, who has the required skills to make Gerty look good! Currently the Ice-golem graphics are made by him and he is already working on the character and monster designs.

You should be harsh. Honest and harsh feedback is what we need and that's why I posted here in the first place. :)
Reply

I finally got round to playing!

I didn't really know what to expect but I was very engaged from the start. The light and tight corridors add a great sense of immersion which I loved and kept me playing!

I tried the melee class but found the skills to feel a little less impactful than the gun slinging chap. This could have been because of the sword animation feeling a little weak and also because I enjoy strafing and dodging from range.

I really like the perk system and the UI is intuitive and smooth. With the tutorial I never felt like I didn't know what to do.

I died early on the first time I played but after that the game didn't feel unfair as I learnt how to dodge the bombs of the enemies. The first level might be a little early for the self destructing enemies as I didn't know what was killing me so quickly at first and I'd be worried it would put some players off if that happened to them.

Overall it was a great experience and I look forward to seeing how it develops as it moves through beta!
Reply
t

Glad you liked it. Thanks for the feedback! :)

I totally agree with you about the melee class feeling less impactful. We will re-do the animations, sound effects and probably the whole graphic design for that character :D It wasn't until a few weeks ago when we updated commandos gun sound effects. It was equally shitty, but new sound worked wonders. Magnus will need some more work though.

Players seem to be struggling with the self destructing enemies. Thanks for the suggestion. We might move them to the latter levels. And we will also update it's graphics since it's quite hard to notice at the moment.
Reply

Mechanics Game Graphics
Neat retro game! Tutorial wasn't confusing but a lot of elements were crammed together so after I was done with it not all the info stayed with me really. I really like the destructible environment but I would prefer it the graphics were more ''up to date'' (even though the whole theme is from 10 years ago). I general a nice well polished game!
Reply
t

Hey, thanks for the roast! We've updated the game quite a lot within the last 2 years. Check it out https://store.steampowered.com/app/455100/Gerty/
Reply

Mechanics UI Graphics
The Good:
-It was fun! I wanted to keep playing it, but had to get back to my work. Great job so far!
-the way resources would shimmer, even if in fog of war, really nice touch.
-balance of enemies and progression
-good variety of enemies and enemy behaviour. I knew what to expect when I saw one, and it was fun to fight them.
-Wide variety of perks.

The Bad:
-Bug that made me want to stop playing immediately was one with playing with Keyboard and mouse (my preferred way to play games). If I wasn't pressing one of W, A, S, or D key, I couldn't press E or move the mouse. Really annoying because I'd walk over a store or teleporter, press E, and nothing would happen. I would have to move around with WASD while I pressed E. As well, everytime I stopped pressing any input, the mouse would lock to 1 location on the screen, rather than just staying stationary wherever it was before.
-the immediate introduction of the time limit feature (and the text at the top "Threat: low") made me want to go as fast as I could, so I didn't read any perks/items, I just clicked on a bunch of things. Perhaps an easing into some mechanics, whether slower progression of items, or introduce the time limit slower, might help. Maybe the time limit on the first level is super relaxed, and you don't teach the player about it until they actually run out of time, else just teach it on the second or third level. Maybe even just have the bar at the top be green if thread is low, and yellow for medium, and red for high
-using green for the flame thrower ammo UI was confusing, I thought it was health (maybe yellow?). As well, the health UI should probably be larger than the flame thrower ammo UI.

2) did not notice the ability hud for a solid couple of minutes, did see it eventually but it was a little hard to read while getting murdered

3) was constantly back pedaling, not necessarily a bad thing depending on what you where going through

Cosmodog is a fast-paced, turn-based adventure game that can be downloaded for free under http://www.cosmodog.eu/cosmodog.html.Here are some screenshots Check out the trailerIn Cosmodog, you will find: Retro style visuals a la 8/16 bit A hand crafted sci-fi open world with enemies, collectibles, secrets, giant worms, labyrinths, teleports and vehicles. Many gadgets that increase your stats and unlock new areas of the game world A sci-fi narration with a broken AI as one of the protagonists. The game was developed in Java and can be played on Windows systems. It was tested on Windows 7 and Windows 10. You don't need anything to play the game. Just download and unzip the file and click cosmodog.exe.