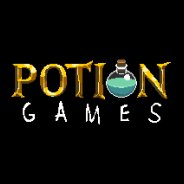 This online multiplayer shooter is all about momentum, transformation and sticking to the ceiling. Test your metal with online competition and a complete single player campaign. Launch your fist and swap characters mid fight in this first of its kind platformer!Features Surface climbing and momentum based system that enables unique acrobatic traversal. Character class swapping mid-battle. 6 character classes to choose from. Competitive online multiplayer with up to 10 players. Challenging single player mode with hours of content. Flying fists that can grabs character classes out of the air, push enemies, and pick up the ball. LAN Party friendly. Inspired by action classics such as Soldat, Abuse, Altitude, Teeworlds, and Quake.

The Good:
-This game looks great. I love the world/character art. Its incredibly strong, you should be proud!
-The general idea behind this is great, I love platform/shooter/puzzlers like this. Keep it up!

The Bad:
- jump sound got really annoying really fast. "hup-uh" should maybe just be "hup".
- if I die in the water in the tutorial (or any early level), I shouldn't get teleported a few challenges back. Put me right back to the start of the water challenge.
-..same with falling to death on level 2, after going all the way up, then I fall down that hole. I should be put back to the top of that hole. While teaching the player mechanics (ie: fall damage), it shouldn't be super painful (ie: having to go to start of level).
- there is a delay on input that makes it unplayable, it looks like with the jump, It processes a few frames, to see if it should do a big jump, or a short jump. Check out Mario to see a better, more responsive way to do that. There is also a delay on walking left/right. You can have some acceleration, but it should be much shorter.
-more indication that you're about to die from creating too much matter would be good too. Some sort of "alarm" sound, or make the edge screen overlay be red (rather than yellow), might go a long way. Else, you could make the UI for the "remaining matter" be the length of the screen at the top, or something.

-I died only once in the water, but was very annoyed that I had to climb back up. Even though its not a challenging climb, and doesn't take that long (maybe 15-30 seconds), it felt really annoying that I had to repeat myself. Once the game ramps up and gets difficult (maybe after 10-15 minutes of play), its totally fine to make the player repeat themselves, as punishment for failing. But while learning the mechanics (the first 10 minutes will feel like a tutorial), I don't want to be punished at all.
-With regard to the jump, I don't think it was performance. I have a Geforce GTX 1070, and a core i-7 3.4GHz, and felt no performance issues whatsoever (no frame hitches or anything). I know its programmatic because if I tap space, he jumps fairly quickly. If I hold space, there is a longer wait period before jumping. Definitely should have 0 delay from pressing jump to when a jump happens. I know its awkward programming it, because you have to check if the player is in the middle of a jump (while in the air), and either add more upward force per frame, or have some sort of scripted movement for x amount of frames, as long as the player is holding jump. Its super unnatural, and doesn't make physical sense. But its so worth it for game feel, its what every other game does, and to do otherwise always feels incorrect. If you don't want to go that route, I'd suggest just getting rid of "hold to jump" entirely, and just have 1 set jump height. That way, you can have him jump immediatley, without parsing the amount of time the button is down.

- Thanks for these notes! Good call about being on the outside of the ship. I was actually planning on doing this, but at a way later level. Maybe it should be introduced sooner to help break up the aesthetics.
- I think you're right about having more varied props/bg tiles. I like your idea of having different ambience, like dirty/shiny/modern. I think we'll try this out.
- Hmm, thats a fair point about the jump. There are actually a few frames after you fall off the edge without jumping, that it'll still allow a jump, but perhaps I could increase that time from 2-3 frames to 15-30 frame maybe? Do you think that would do what you like?

The Good:
-It was fun! I wanted to keep playing it, but had to get back to my work. Great job so far!
-the way resources would shimmer, even if in fog of war, really nice touch.
-balance of enemies and progression
-good variety of enemies and enemy behaviour. I knew what to expect when I saw one, and it was fun to fight them.
-Wide variety of perks.

The Bad:
-Bug that made me want to stop playing immediately was one with playing with Keyboard and mouse (my preferred way to play games). If I wasn't pressing one of W, A, S, or D key, I couldn't press E or move the mouse. Really annoying because I'd walk over a store or teleporter, press E, and nothing would happen. I would have to move around with WASD while I pressed E. As well, everytime I stopped pressing any input, the mouse would lock to 1 location on the screen, rather than just staying stationary wherever it was before.
-the immediate introduction of the time limit feature (and the text at the top "Threat: low") made me want to go as fast as I could, so I didn't read any perks/items, I just clicked on a bunch of things. Perhaps an easing into some mechanics, whether slower progression of items, or introduce the time limit slower, might help. Maybe the time limit on the first level is super relaxed, and you don't teach the player about it until they actually run out of time, else just teach it on the second or third level. Maybe even just have the bar at the top be green if thread is low, and yellow for medium, and red for high
-using green for the flame thrower ammo UI was confusing, I thought it was health (maybe yellow?). As well, the health UI should probably be larger than the flame thrower ammo UI.

Thanks for the feedback. I was just wondering if I could get clarification on what you said. You mention that it was too difficult, but not because of enemies or level design. Do you mean that the character feels sluggish? Or that you would want more bullets/ faster bullets? I'm just not sure what you mean by "the reaction, too slow of the character, needs more weight to me". Thanks again for your feedback!