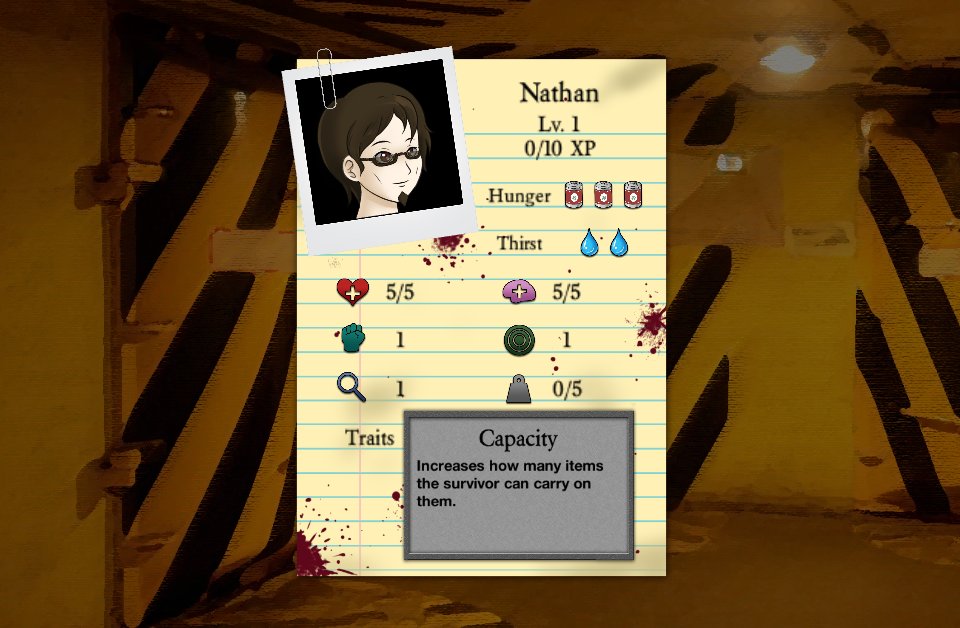 Survival City is a roguelike survival-strategy game where the player tries to lead a group of survivors towards the edge of the city. Survivors are randomly generated with two out of 75 different gameplay traits and one of 9 different personalities. Locations are searched for supplies but will sometimes have zombies. Events also randomly occur with choices with risks or rewards for the survivors.

An ingame guide is provided detailing most of the gameplay mechanics. However, it should be noted that in order to fight zombies, a weapon needs to be equipped on a survivor. Otherwise, the only option is to run away (performed by pressing the left and right arrow keys repeatedly). Other than that, the game is about managing Health, Sanity, Hunger and Thirst for the survivors while they explore the city.

The current game features no music and limited sound effects. I hope to launch a Kickstarter to both hire a composer, as well as an artist to replace my artwork to something more professional looking. Until then, most game mechanics should be functioning and playable.

Cosmodog is a fast-paced, turn-based adventure game that can be downloaded for free under http://www.cosmodog.eu/cosmodog.html.Here are some screenshots Check out the trailerIn Cosmodog, you will find: Retro style visuals a la 8/16 bit A hand crafted sci-fi open world with enemies, collectibles, secrets, giant worms, labyrinths, teleports and vehicles. Many gadgets that increase your stats and unlock new areas of the game world A sci-fi narration with a broken AI as one of the protagonists. The game was developed in Java and can be played on Windows systems. It was tested on Windows 7 and Windows 10. You don't need anything to play the game. Just download and unzip the file and click cosmodog.exe.