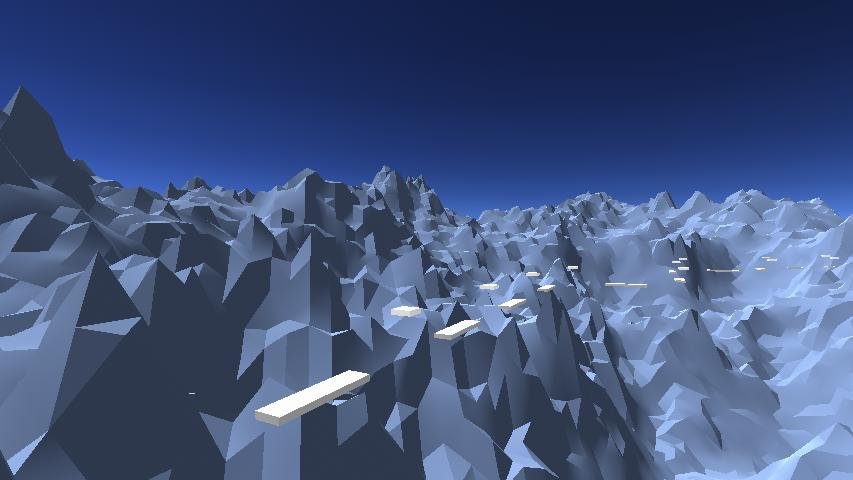 A first person platformer based on using a grappling hook to swing around. It contains one short map, which can be gone through in around 10-20 minutes. The game is currently in development and I would appreciate any input and feedback.

The default controls are WSAD to move, SPACE to jump, LEFT SHIFT to wall jump when in air and close to a wall. Left mouse click shoots the grappling hook and right mouse click cancels it. You can press R to respawn at a save point, and P to show frames per second. The game is meant to be played at higher frame-rates (>80fps), given the sharp low-poly environment.

The settings menu isn't done yet, and it's preferable to set your visual and control settings in the unity launcher. Currently only the 64-bit version is uploaded, I will upload a 32-bit version soon. I have a very poor computer and recording gameplay is quite difficult for me, so I'd definitely appreciate if someone made a short gameplay clip similar to mine - let me know if you do so.

UI Graphics Controls
Here you go, hope this helps (originally a reply to your roast of my game).
I just tried your game out (love the menu by the way).
Your swinging mechanic is hard to get the hang of.
I think the platforms might be too low or maybe it needs a simpler level. But the flow is not quite there.
I think it might also be the fact that swinging with the two mouse buttons aswell as arrow keys and the space bar is too much input to have to use.
If you've ever played the Amazing Spiderman games, I think they used holding and releasing to implement swinging.
If you could hold and release one button it might be easier.
Aiming to get your rope to a ledge is also pretty taxing mid swing because gravity doesn't help much (nothing wrong with it, it functions but design wise it doesn't work, its too easy to click the wrong button).
Other wise all your mechanics work functionally, no bugs on my end (Windows build) and your level background looks nice, again well done on the menu.
Reply

Game Graphics Controls
Graphics and music were nice. Controls were simple but I couldn't get even halfway. Reminds me a little of the grappling hook in Just Cause 2, so maybe make it work in a similar manner.
Reply