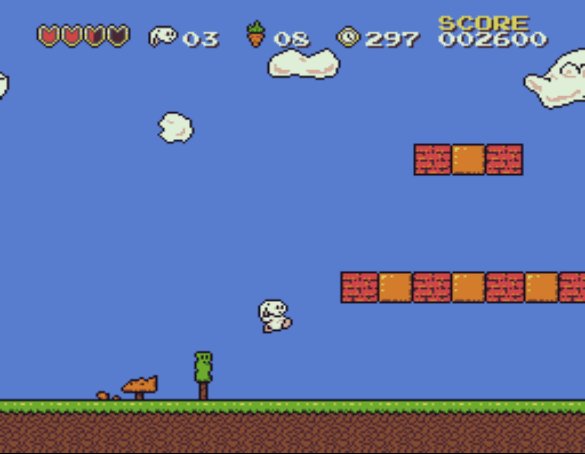 Hi! Hope everyone is doing smashing! I am a helper for the independent game studio Flip Industries and looking to collect feedback on the first stage of Hop and Bop. Flip Industries makes their games for a hobby and creative outlet. Please help them with play testing Hop and Bop.

* details below taken from the Flip Industries site *
Plot: You wake up under a bush with no memory or recollection of what occurred. You feel cold and your mind is fuzzy. You know that you must explore this world. It feels familiar, yet somehow you know the inhabitants are hostile. Have you always been a rabbit? How did you get here, why are you here? You must push forward in order to get the answers you seek. Challenges certainly await you, along with tough foes. What will you find at the end of the rabbit hole?

About: Hop and Bop is an action style platform game and was developed by Flip Industries. Featuring “8-bit” NES style graphics using a total of 16 colors and addictive chip tunes produced by JMF. An editor allows you to create your very own custom areas and publish them for all the world to play. Fans of the NES and Super Mario Bros. just might find something they like with Hop and Bop.

Motivation: Hop and Bop was originally developed to create a generic platform game engine for Flash. To apply limits similar to those on 8-bit systems such as the NES, it was decided that a total of 16 colors, specifically the DB16 Palette, would be used throughout the entire game. It was also decided that a tile-based rendering system would be used and the resolution was set to 256 pixels wide by 240 pixels tall. Likewise, the music would be chip-tunes and produced with PxTone and the sound effects 8-bit in nature. Unfortunately, Flash was ultimately euthanized in January of 2021 and Hop and Bop was then ported over to JavaScript.

Editor: Want to play it your way? Use the editor to make your own areas exactly the way you want them. Come up with anything good, you can upload it for all the world to play! Now you are making with power!

The game and editor are free to use via any web browser! Please let us know your general feedback on the first stage and editor as well as any suggestions!

Game Graphics UI Graphics
I played through the second level and its pretty solid. The pixelated graphics fit nicely and the music is pretty good. It definitely seems alot like Mario Bros. You should add a way to change the pre-set controls though. I didn't try out the editor but it looks straight forward to me.
Reply

I freaking love this lol! Brings back memmories of being a kid an eating lucky charms on a sat morning!
Reply