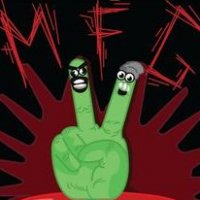 Roam the dark coriddors of the Nostrema shuttle,You are a member of the clean up crew after a catasphrophic accident on board.Take out the scumbags as Master Chef the Generic Space Marine!Doom, Aliens and Duke Nukem all mashed together with some retro pixel art.

Firstly I think it really has some potential.

Few issues, firstly I feel like the enemies take way too many shots to kill (try and make the player feel empowered at the beginning of the game)
I would work more on your graphics, add some shading based on light source etc.

I found the music on the title screen literally ear piercing as the sounds where very high pitched so maybe lower the volume of the music.

Maybe build the first level in a similar way to Mario where it shows you how to play it without the need for text boxes.

Look forward to how it progresses.

The graphics are very nice, did you create them?
Found that as my buttons where disabled I couldn't exit the game
The battle system was a cool idea although on my 3rd Battle the orbs appeared under the text box making it hard to fight them.
I would work on the dialogue as the grammar needs some work.

Hi
Thanks I am glad you enjoyed playing it!
Can you expand on your feedback regarding not knowing how far you got?

Not much to say about this one, it works great and I love the mechanic.
Not too much extra going on.

One thing I would say is maybe polish the graphics as they are way too basic even for the minimalist approach in my opinion.

I think with more things added this game could really come into it's own.

Played this and not a big fan unfortunately.
I would advise working on the graphics and level design.
The graphic styles tend to clash, also the platforms just look blurry.

Put more thought into the level design, a thing which would instantly make it look better is to have the downward length of the platforms go to the edge of the screen, this would make it look less like the platforms are just floating in mid air.

The image capture moment is a nice addition although I feel it could be even better if you had a death animation.

I think you have a long way to go with this, but if you keep improving it, it will make you stand out from all the other runner games on Googleplay.

I Jazzking2001 that would be really great, I will send you an email in case you are not on here anymore.

I didn't feel any of the game needed work as really enjoyed it. It wouldn't keep me hooked for hours but as a fun game to play on the bus it's great.

Very nice graphics, nice upgrades system and the adverts wasn't obtrusive either, so many games fail on how they use adverts.

The game looks a lot like a proof of concept and could really do with some polish on the graphics. The idea is an interesting one and I found myself trying different ways to beat the levels.

Never been a big fan of puzzle style games so I am not really your target audience but I enjoyed it for a little bit but found level 4 too hard and I gave up after a few attempts.

The game is heading in more of a survival horror direction and so the next update will have the character moving slower, a reload mechanic and jumpscares. I may well add a continue screen but at the moment the game only has 5 levels so it's not very long right now.

The music is all done by Stu who I work with and the sound effects are from a website called freesfx, the voice work is me putting on a bad Duke Nukem voice and altering the audio in Audacity lol.

I have put a settings screen in and the voice over work is set to 0 as standard as it takes away the new more tense atmosphere.

Nice game, I can see myself playing this one a lot.
Couple of things that take away from this great games potential, firstly add some shading on the characters as they all look very flat.

Seconds if the user isn't touching the screen consider making the game pause as that would make things far better for me.

Other then that it's a great game with nice smooth animations and it's full of action.
Good luck with the rest of the development.

Hi,
I saw the game was £1.99 which in my opinion is way too much.
Firstly well done for making a game, its a big deal, I say that as a fellow developer who also using Clickteam Fusion 2.5.

I didn't download the demo as it was a massive 26mb and also I am at work but let me give you some pointers to improve as a developer.

Firstly the graphics put me off straight away, try and blend the graphics so they all follow a similar art style, it looks like some of the graphics are taken from the Clickteam library or another source and others are drawn by you.

Here are some places to help you with pixelart, I have learnt a lot from them.

The trailer intro is far too long so remove the first 30 seconds straight away, a good trailer is meant to be around 1 minute and it needs to get straight to the action as you don't have long to grab peoples attention.

The next tip is use the Platform Movement Object instead of the built in movements.

That's it for now, you have a long way too go but hey you finished a game so that's a big accomplishment in itself.

Downloaded this after watching the video, I didn't realise you had to control both cars.
Unfortunately this mechanic made me not enjoy it at all.

Graphics had a cool look and I wish you look but the game is not for me.

Nice and simple concept with some great addictive gameplay and crisp graphics.
I will keep playing this one.

Getting noticed is so hard now because everyone is making games, unfortunately that includes the tons of shovelware too.

Keep pushing on any social media you can including Instagram and Youtube, also try to go to game meets/exhibitions if you can.

Thanks for your comments. The timer is just for an extra bonus, sorry you didn't enjoy the game too much but I appreciate your feedback.