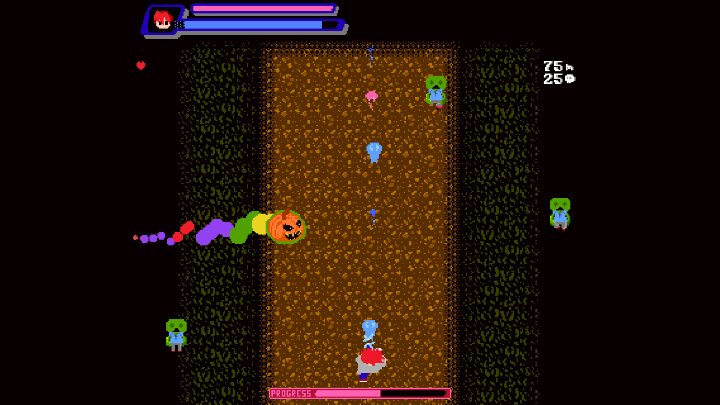 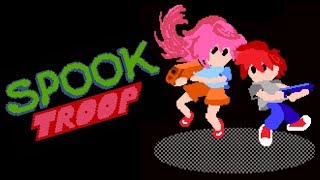 Spook Troop is a game where you fight an endless onslaught of enemies that get progressively harder as you go. It is a fast-paced and twitch reaction game that requires the player to think and act/react fast to what is shown on screen! Compete against your family and friends for the high-score! Has anyone been able to defeat all bosses yet?

You control a red-haired boy and a pink-haired girl as they run away from a pair of huge white hands. On the way, enemies come down from the top of the screen - Which you need to defeat in order to stay alive, as your health bars gradually depletes -, and the more you defeat, the more varied the enemies become. Each player also has a weapon meter, which once filled, will drop one of 4 weapons available for each character (for a total of 8 weapons) . Every ~50 enemies defeated, the players have to defeat one of eight bosses, each with different attack patterns and movement types. Once the boss has been defeated, the players advance to the next of one of the four stages. Each of the stages has a different set of enemies and different backgrounds and sweet NES-styled synthesized tracks. Once you finish all stages, the game loops - but the enemies take more damage to be killed, so it's an extra challenge. In multiplayer co-op, the players are able to revive each other by simply killing enough enemies and filling a revive bar. While on single player, the player does not have that hability, but all of the weapons are available.

• Fast paced, twitch-reaction retro game
• Awesome 8-bit NES style soundtrack
• Inspired by many arcade and videogame classics
• Different roster of enemies and bosses
• The only ads in the game are in the loading screen, no in-app purchases

I have uploaded my play test to YouTube in case it helps :)
https://youtu.be/3T2_4ubsl1M

I think you have done really well with Spook Troop, it seems to run as expected and bug free :)

As usual I sucked at the game... I would definitely play longer if I wasn't dying so frequently. Not sure what your plans for the game are but probably tweaking it so the average run is around 2-5 mins would be a benefit for the mobile market.

I think the graphics are appropriate but also probably the weakest point of a strong production.

Good work and look forward to improvements. I will gladly play any updates you post :)

Animation Game Graphics
Nice game, I can see myself playing this one a lot.
Couple of things that take away from this great games potential, firstly add some shading on the characters as they all look very flat.

Seconds if the user isn't touching the screen consider making the game pause as that would make things far better for me.

Other then that it's a great game with nice smooth animations and it's full of action.
Good luck with the rest of the development.
Reply

Mechanics Story/Writing/Dialogue
Really hard to fault this game. Retro, fast paced game. Remind me of old NES era games. Well done!!
further improvement, think of ... maybe write an intriguing story line or funny one (if you prefer it that way)

if you don't want to make great effort, maybe something like - scrolling text like the star wars...
(yeah, I can hear you're start humming! that's the way...)
Reply