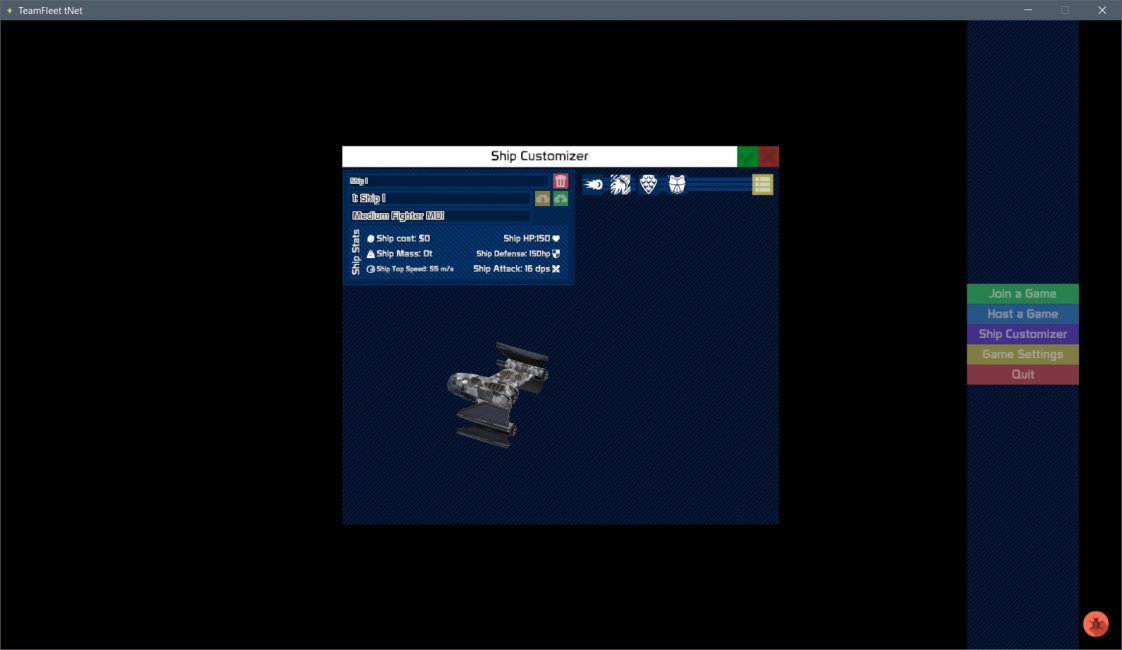 Team Fleet is a Sci-Fi third person action space shooter in the vain of games like “Subspace: Continuum”, “Star Trek: Star-fleet  Command” or “Star Control”.   It will be primarily multiplayer with players being able to host private and public matches. It will offer mainly team based play with some free-for-all modes. There are planned to be around twenty ships flyable on release, with possibilities for more after release.

This is the first release for 0.4.1 today, there are many new features planned for the coming weeks for this version. Todays release has the following changes…   Additions -Background and stars added -Space dust was added for atmosphere and to help with orientation -A new Small Fighter Chassis   Changes -Adjusted gun fire rates and damage rates -Some component size adjustments and requirement changes   Bug Fixes -Fixed player name not properly following player ships -Fixed news feed start position   Keep in mind as development progresses many changes and adjustments will be made to components and ship. However feel free to email us or use the in game report tool to let us know if you think something should change or if it was better before. Thanks and have a great week.

Things I don't like:
- Registration (I think you should add a guest option, if that's possible)
- Font when registering is hard to read
- I think you should move that accept / agree button in the lower part of the menu instead of keeping it in the upper right corner (at least this is what I got used to, it's a small issue but I thought I'd mention it)
- Engine by default (you should probably set a default engine just to make sure that player can, at least, move. I didn't even notice that engine icon in a customization menu the first time I started the game and I was wondering why I couldn't move)

I wish you best of luck!
Reply

Thanks, this is great feedback. Probably have everything you mentioned implemented, though not sure about moving the accept button just yet.
Reply