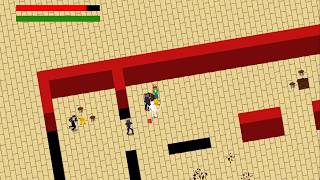 - Player gets knocked down when hit hard enough

- Tried to make kicks easier to land by making the hitbox longer and moving the rotation point up so its more in line with the leg in the sprite.

- Quitting from the pause menu actually ends the run

- Black suit enemies no longer bleed forever on  a crit


Alternate Version
-Bizarro Punchy
- Doesn't use stamina, has some other shit goin on.