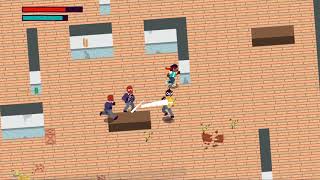 1 year ago by 8points

(Roguelike beat em up)
Save your uncle's youth center from getting shut down by the evil landlord in Super Punchy Face; a physics-based beat 'em up where everything is a weapon!

Everything is a weapon - From beanbag chairs to ping-pong paddles, mop buckets to candy boxes, everything can be swung, thrown, kicked, and more to defeat your enemies.

Custom fighting styles - Choose from dozens of techniques to create your unique fighting style. No boring stat boosts, these upgrades augment the mechanics or introduce new ones to make for a unique play experience.

Beat 'em up + Roguelike - A modern take on classic beat 'em up combat that blends physics and tenacious opponents with procedurally generated levels to ensure it will never stop surprising you with slapstick gameplay.

Heartwarming story - Control titular hero Punchy as they and their uncle stand up to the evil landlord and embark on a wholesome quest to save their community center from being demolished.

Well the site was down for a while there, so there's a looooooot of new shit i've done since the last update.

The big things are:

I think we're technically in alpha now that the scripted stuff is in. So, yeah, pretty cool.

more art, some other stuff