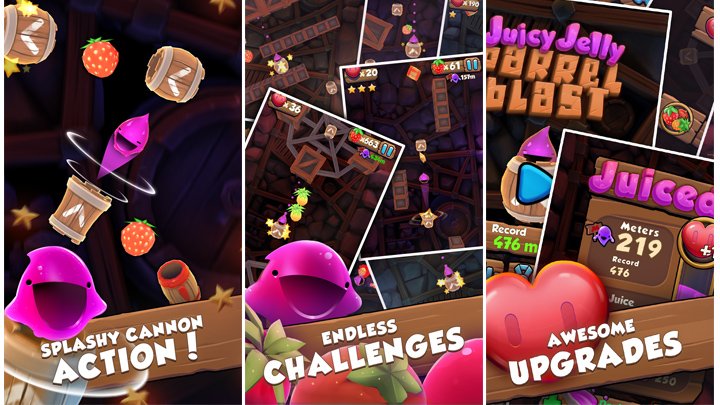 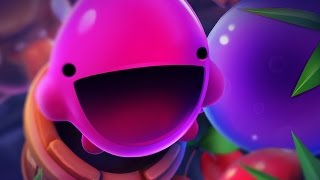 3 years ago by JoeCool

What is Juicy Jelly Barrel Blast?

Juicy Jelly Barrel Blast is really easy to play. It's all about right timing. Just tap somewhere on the screen to shoot Juicy Jelly from barrel to barrel, but make sure, it does not hit any obstacles inbetween. Catch as much fruits as possible to get more hearts and unlock tasty fruits.

As soon as you have gotten the hang of it, try to get 12 consecutive shots before the star effect vanishes. Now you are in juice heaven, each fruit converts to a star and gives bonus juice but also speeds up the game a bit. This is where JJBB gets even more exciting.

35 achievements and 4 leaderboards keep you going to compete with your friends or other players.

The video looks really great, I watched it muted the first time, then tried the sound out. I think that showed me that there needs to be some work there. The music choice is a very techy/sci-fi track which is kind of minimal and slow, it doesn't match the pace and setting or this video. I would go for something more upbeat and high energy with more traditional sounding instruments.
The visuals say "Wow! Loud fast bright moving colours!" so the music should be something like high speed JPop or jungle breakbeats etc.
The barrel shoot sound also, after just a few seconds is already repetitive and annoying, making some more variants would go a long way.

Thank you so much for having a look at our game.

Good feedback regarding the music/sfx. We have made the music with Music Make Jam (we are only 2 guys only with art and programming background). If you play the game you will realize that the pace does actually quite fit. Its a 100 bpm and I have tried fast bpms without getting the same good feeling. Nonethless there might be better fitting music, but therefore we would need a professional composer which is too expensive atm. Regarding the SFX you are totally right, we need more variants of particular sounds!

Level Design Story/Writing/Dialogue
Duuude! Your game is awesome! Great undercover tutorial, great level design patterns. Graphics is attractive, the sound as well. It's very visible the hard work that went into making it. I congratulate you, sir! Good job. Nothing to roast here, really. I see it's doing great in installs as well. Well done!
Reply
h

Now I see that you're actually a seasoned developer. I imagined so. Good luck ahead!
Reply

I might be asesoned developer, but that does not protect you from making bad games, I know this, because I have worked on enough games which I think are medicore or even really bad ;).

Great installs is relative, as 15k DLs seems a lot for two weeks, but we have had a little feature in the Google Play Indie Corner and it was less DLs than expected tbh. It wasn't so bad either, because we had time to polish the game more. Nonethless the Google Play Store is a bitch to get a decent number of downloads, its really hard, and we are struggling with good keywords, store conversion etc. We are actually spending a lot of time on those things and still scratching the surface. Hope to get the hang of it sometimes or switch to make some more complex games for PC/Steam. :).

Totally true! I have a similar experience. Google Play is all about optimizing ASO and getting reviews for increasing installs. Being featured on GP doesn't help that much. The appstore is the opposite: you have to rely on featuring and not so much on ASO.
I developed 2 games and both of their launches were a failure (Roll Away, Some Sums). Made so many mistakes... from game genre, to art style, or marketing story (because it doesn't have something particular, it's not worth promoting the game through ads). Like you, I just hope I'll get the chance to work on PC game one day.

Best of luck, mate! I wish you reach the 100K installs checkpoint in no time!
Reply
F

Controls Story/Writing/Dialogue
Game Graphics: I like the art style, it fits the game perfectly.
Game Mechanics: The Idea is original and good.
Learning curve: The game is easy to learn(which I think is especially important on mobile) , so that anyone can have fun with it plus points for that .
Controls: the controls are perfect for a mobile game.
overall great game.