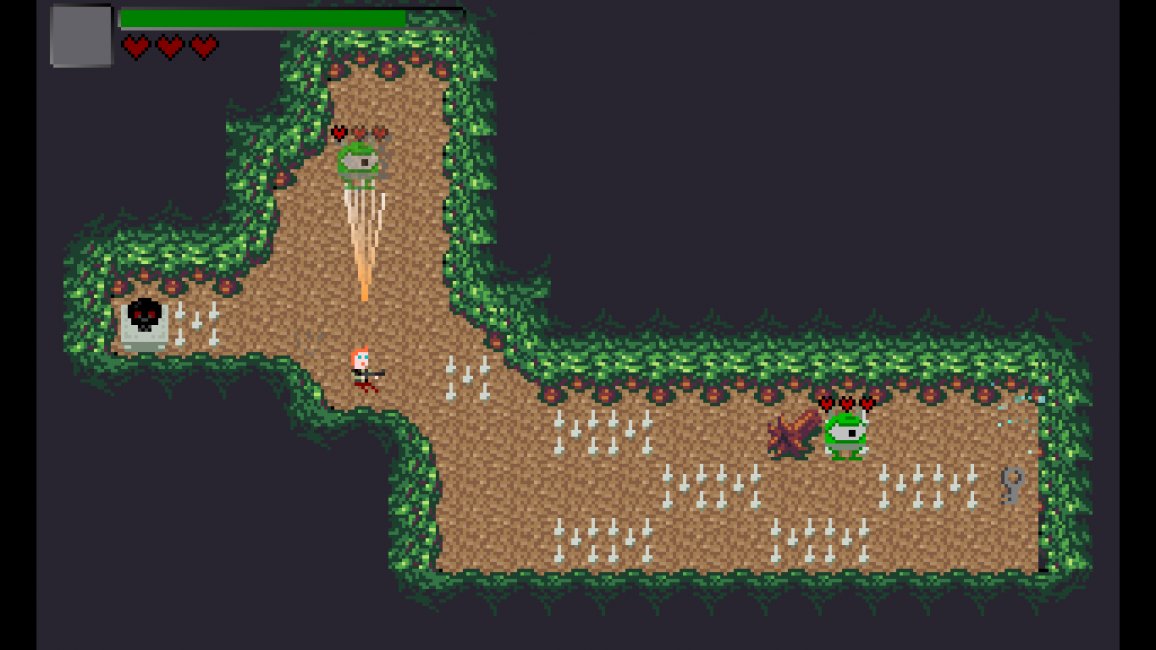 Trollhunt is a turn-based puzzle game in which your goal is to steal Legendary Tight Pants from trolls, so you can become unstoppable! It was created in less than 48 hours for Game Maker's Toolkit Game Jam.   Although it is turn based, you have very little time for execution, and often one tiniest misstep means failure in this unforgiving game.  I thought that it would be interesting mixing planning and discovery of puzzle games, with executional demands of fighting games, and thus this monster was created. It's all about those tasty animation cancels!   In this game you are expected to figure everything out by yourself, but if you're stuck, here's a spoiler: While moving, tap a direction to shoot. You can shoot while bouncing off an altar. The shoot has a sweetspot 2 tiles away (where the smoke appears) and it deals 2 damage. You can dash through spikes using the attack's knockback. You can press space to read the item's description. Also, 0 key turns on slow motion, 9 turns it off back again.

i didnt play the game yet. but looking by the screenshots. the game is pretty decent . work on the graphcis side and u r good to go! will play it and let u know!
Reply

Well, i think that the graphics are good enough for a jam game. Keep in mind, that the resolution is 320x192, it looks rather decent for something this small.
Reply

I cant play it because I don't have pc
Reply

I'm sorry to see that. I hope there are many good mobile games you can enjoy, I can recommend you some :)
Reply

There's an Itch link under the download button, and there's only a PC version. I guess this game would be a nightmare to play on mobile.
Reply

Mechanics Tutorial/Learning Curve
Really good for a 48 hour game. I never would have figured out how to jump over the spikes without reading the itch.io page, though.
Reply

Looking back, learning in this game is terrible.
Reply

Game Graphics Tutorial/Learning Curve
Pretty good for a 48 hour jam game! But I'm not here to praise, I'm here to roast. There is no learning curve and I was pretty much stuck at the 2nd level without any out of game help, this is a big no for any game imho. Controls should be straightforward or explained in one way or another. I know the controls are intentional but I find the shooting/jumping horrible.

With the art style you have going I'm sure you can create a much better game even within a weekend. Have some timing traps, puzzle mechanics and slightly smarter or more interesting AI and you got something very interesting.
Reply

Thanks a lot for checking it out!

Those are good suggestions, but way beyond jam time, the game's systems were complicated enough as they were. This game has probably the worst learning experience of them all, can't argue that :D
Reply