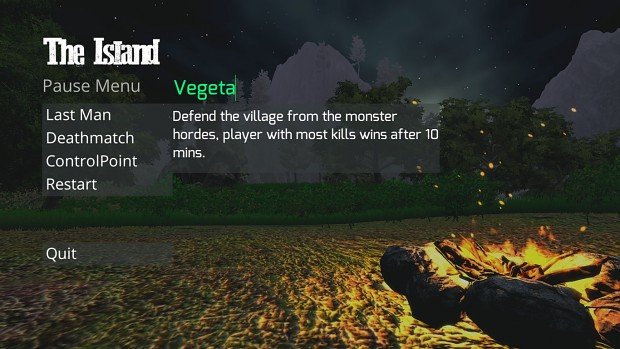 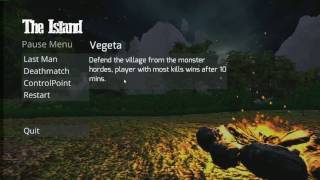 6 years ago by Vegeta

The Island is a FPS multiplayer where you wake up on an island and have one goal, survive.

You have two weapons with one that can be unlocked later on. (The use number 1-2-3 to switch between)There are currently 3 gamemodes from which you can choose i recommend trying out the Control Point one since you can still encounter AI enemies even if there are no other players connected.

The controls are: WASD movement with SHIFT sprint, SPACE jump, LEFTCLICK to shoot and RIGHTCLICK to zoom, R to reload, press TAB to see the scoreboard, C is the map/camera players are represented through a green circle to show their general area also G for grenade which refreshes on kill.

After connecting in a room you can check how many players are connected in the description panel. You can unlock ranks for your solider once you reach a threshold of kills with a name, it will show up in the next match after you unlock it.

Game Graphics Level Design
Wow, this is an ambitious project! I really like the stormy feel, which added a bit of tension. I played on control point mode, as suggested. After about 15 minutes without finding anyone (I know there wasn't anyone else playing online, but I didn't find any AI enemies either) I eventually drowned in a river. There was no grass or anything either, which makes me think maybe I played an older version of the game from the one in the video. I'd be happy to take another look if there's a newer version around?
Reply
V

Thanks for your review, you should check the quality settings before launching i recommend Default for maximum efficiency. For the AI to start attacking you have to find the little village you see in the demo, it should be close to the river you've drowned in.
Reply

Thanks, have had a play now, and will review in just a bit :)
Reply

Game Graphics Level Design
After my previous review, I went back and played this again on "Default", instead of "Best" quality. I think the core idea is cool, and the world it's set it looks great - has a really stormy feel to it. Maybe the rain particle system could be hammed up a bit to really lay it on, but it's already cool as it is.

Character animations were lacking a bit - They tend to slide around the environment, and people who aren't carrying guns seem to be shooting. I spent a while trying to shoot somebody before eventually realising (I think) that they're on my side. Perhaps coloured names above people's heads could fix this?

The biggest problem I think this game has at the moment though, is that it's not really clear what you have to do. I spent a good 15 mins the first time just wondering around. The second time I was straight in the action, but then the third time I again spent 5 minutes wondering around. Luckily this is probably a simple one to fix though, perhaps a change to the spawning system to make the player appear nearer to the action would help? Or even just a map / radar / UI on the screen pointing to the base.

Like I said in my first review, this seems like a really ambitious project, and that's great, but it's going to take a lot of work to make this a really compelling experience. The base structure is a great example of how you can do this - it's a cool building, and more like that would make it a much more interesting combat arena.

On the go where I did get into the action I enjoyed myself, although I sadly wasn't able to successfully defend the base - I'll try harder next time! Keep it up - I look forward to seeing how this develops :)

Game Graphics Tutorial/Learning Curve
Nice first impression. I loved how the trees moved with the wind (something similar should happen to the grass though, and my clothes, and so on, it's a nice feel if you can keep it congruent). The problem I have with this game is I have no idea what to do or where to go, and how the level is made of steep hills. Also, the water effects are exaggerated. Unity has some other water effects that in my opinion would fit better. Also I jumped into the water, and after the countdown ended was teletransported to a strange place, so I ended up more lost than before. All in all, I think the player needs a visible purpose as soon as the game starts.

I would like to see more people play this game, it could be fun so have some online matches.
Reply
V

Thanks for your review. The grass should definitelly move in the wind but i think the clothes might be a little over my head for now. The water is supposed to be a no-go zone so you would stay on the map and it should kill you if you stay in it for 10 seconds if i remember correctly, i have no ideea where you got transported so i'd guess that was a bug. The game at it's core is supposed to be multiplayer but its quite hard to gather a playerbase for a small game without any kind of pr. In control point you should find a little settlement who will proceed to spawn zombies that will attack the building.
Reply
j

I'm not quite sure on what I'm supposed to do in this game. I played this with my friend, but the enemies kept on bugging out. They'd flicker, and sometimes they'd only appear on my screen and not my friend's, and vice versa
Reply