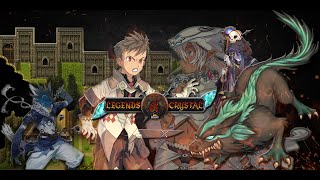 STORIES
Legenda Kristal is an adventure game featuring history in Indonesia. The purpose of this game is to preserve the history of Indonesia among young people, using the method of learning while playing that is expected to introduce a typical character in indonesia.Game This tells the struggle of a young man to convince the heroes in the past in order to mambantu defeat Dajjal and his troops wants to destroy mankind in the future. Now the future of mankind is in your hands, and only you can convince them, in order to save mankind. So, now convince them by studying its history and feel the sensation of adventure.


In Demo Version , this game contain system battle Rpg , you can get sensation epic animation with monster battle. Player can choose skill for use to defeat a monster. You can try game play in the browser from itch.io or you can play in the browser in gamejolt. Defeat all enemies and clear the game

Story/Writing/Dialogue Level Design
I like the style of this game and the chosen section story is a little bit like the story i read in a book. Like this much
Reply

thank for your reply , you can check my progreess game in my website

Game Graphics UI Graphics
I did a quick playtest on Mozilla Firefox (web version). Here are my comments:

Gameplay:
I find it quite hard to understand. There is no introduction at all (I hope this will be added later).
It's hard to see distinguish the attacking move. It's not clear which attacks are weak and which are strong. I mean, it's easy to do *something* in the game, but I had no real idea what I was doing in the game or what the attacks meant. I've been playing RPGs before, so the general concept is not foreign to me, the difficulty is to understand what all those moves do *exactly*. You know, the devil lies in the details. :-)
In my playthrough I kept playing the game by basically just spamming random magic/physical moves, I had no strategy at all and still won! :D
There are so many attacking moves but I don't really know what they do, I think that's the problem here.

I think this definitely needs more work. The attacks need to be more meaningful (in that you actually understand what they do).

To make it better, the relevant information of the attacks (like estimated damage/attack strength) should be made more visible. Otherwise I don't really feel in control and the game just feels so random.

UI:
The options have confusing and weird abbreviations, they should be written out in full. The game in general has tons of abbreviations which are not explained.
What's a bit annoying is that there is no “back” button. The only way to go back is to hit Esc, but there's nothing to click. :(
There's a complete lack of any help so far, this should definitely be added. Also some intro would be nice to see what this game is all about.
Some of the windows are pointlessly small as they only contain 4 selectable items in it. This means there are scrolling arrows in fairly small windows, you often have to scroll. I suggest to increase the size of some windows to get rid of the scrolling arrow. One example is the attacking menu, which has more than 4 items but a tiny window. As all the options of this window are important, it would be better if they are are also all visible at the same time (get rid of the scrolling).

I don't know about the PC version, but in the web version there's no proper fullscreen. The game graphics do not stretch across the screen.
Maybe in the PC version the game screen is scaled properly. You could take a look at that.

I don't understand some of the texts, looks like a foreign language to me.

Bugs:
- When I select “Keyboard Config”, I get an error: “SecurityError: The operation is insecure.”. The game stops, I have to reload the page.
- No way to delete characters when you input the name.
- The team members don't fit into the list of battle results

When I start the game and it asks for the name, I click, then an error pops up:

Some of the bugs are probably due to the fact I tried the web version.