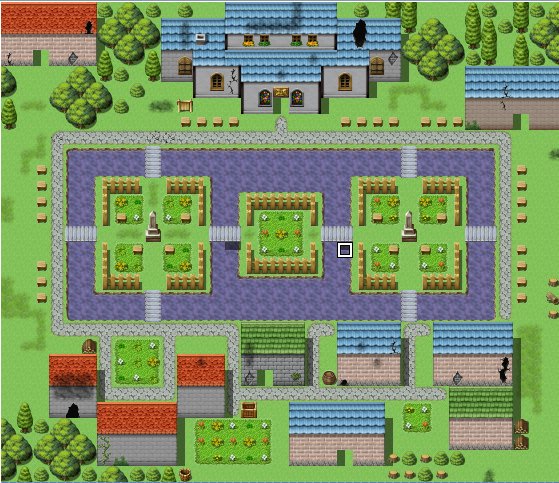 Game Graphics
So, RPG Maker 2k3 is... probably not the wisest choice for a game engine. Yes, I know great things have been done in it, but frankly many of them were hamstrung by it. Try GameMaker instead.

The prose (the actual words part of the writing) serves, but it's not really *good*, which I wouldn't count as much of a big deal except this is a JRPG so prose is, like, 85% of the game. I strongly suggest you practice your fiction writing; write short stories and post them on /r/destructivereaders and the Absolute Write critique forums.

The "whenever you see an item with an exclaimation mark over it" text is way, way too long in addition to being unnecessary. You spent, like, six seconds telling me something that was completely obvious! The exclaimation marks are a good idea - they're a self-teaching mechanic. Don't fuck that up by then deliberately explaining it in a long winded hunk of text.

Having the first meaningful thing you do in the game being a search-and-fetch quest is a pretty shitty idea. Either this is unrepresentative of the rest of the game, in which case it's a bad and boring intro, or it is in which case you have bigger problems.

The searching is a _little_ dull. I'd make the exclaimation marks come up as soon as you enter a room instead of when you approach the object; that way you can _immediately_ determine what's interesting in there. Make sure you don't have dead ends and empty rooms with nothing in them - walking around waiting for the game to tell you "you can do something interesting now" is not fun.

Here, this guy explains it all better than I ever will: http://www.gamasutra.com/blogs/HermanTulleken/20150729/249761/Color_in_games_An_indepth_look_at_one_of_game_designs_most_useful_tools.php

I realize you're working with RTP assets (which is kind of a problem in and of itself) but you can always modify their coloring with a free tool like GraphicsGale or GIMP (the former is actually designed for drawing pixel art, I recommend having both but for this purpose GraphicsGale is the one I'd recommend more than GIMP).

Anyway, I looked in every room and didn't find the glue, so that's where I stopped.

Is the music RTP? It sounds good, either way.
Reply
V

Sorry for the late reply. I am afraid I didn't get a notification when you posted the feedback.

I agree with your feedback. The game being done in RPG Maker VX Ace wasn't the best choice, this is just
a demo to showcase the features and the premise of the story.

I used everything in the RTP except music was a pack that came with my bundle purchase.

The glue looks like a small glass bottle with some clear liquid inside of it. It is in
the top right corner for the room, around the beds.

The game is right now being redone in Unity and will get a few redesigns. Hopefully,
the new writing and the new design will make it look better.

Again, thank you very much, your feedback helps a ton!
Reply

Seriously plz get a link to it
Reply

Story/Writing/Dialogue Game Graphics
I have tried the game.
I LIKE that the mysterious atmosphere it creates. Player remains unknown on what is going on and seeking the truth by exploring the town. And there's also a mini-game to refresh the feeling of sad & uncertainty.

I dislike the font I guess, it's a bit hard to read in the small resolution game. Maybe try some other font with more readability. Some context also hard to understand.

All in all, an interesting game. I'm curious about what's going with the story.

If you have time, try my game: http://bit.ly/2JEnPg2
Good luck with the development!
Reply

Level Design Mechanics
The moment i saw the main picture i thought hey this might be an interessting economy / strategy game. (Maybe i love those genres xD) but then i saw this is some rpg maker thing which im not a fan of. pitty...
Reply
M

Game Graphics
The graphic and story are really good
Reply