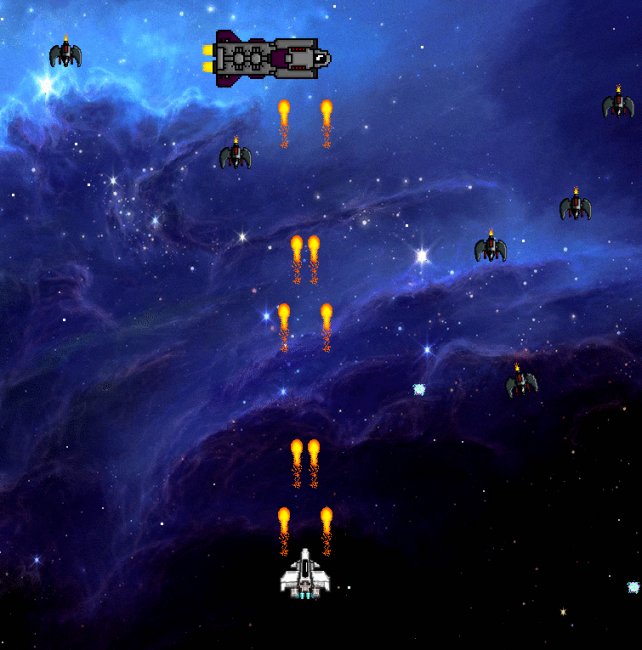 GalBlazer is a vertical scrolling SHOOT-EM-UP with several power-ups that you can obtain, as well as an endless supply of enemies to destroy. As you blow up enemy ships, the numbers will increase each wave.

The art direction and style is based heavily off of retro shooter games from the SNES/TurboGraphix era.

All sprites, music, and sound fx are original creations. The game is programmed in Python using the Pygame libraries (which is essentially an SDL wrapper).

Game Graphics Mechanics
Not a huge Shoot-Em-Up fan, but your game is actually quite good! Solid mechanics, fluid controls, I like it!

The visuals of your game are my favourite part though. Very consistent style with some cool details here and there. But I do think that the projectiles that the enemies are firing are quite hard to see on the star filled back- and foreground. The projectiles of the player are quite conspicous, so maybe make the enemies bullets pop more.

I also think your game misses some basic highscore tracking because as of right now, there is no reason to shoot anything if I don't get points for doing that. A UI for the score and a highscore text at the end of the game would be great. Another thing I found a little bit offputting was how loud your soundeffects are. It just blared out of my speakers when I first started it up so maybe set the master volume a bit lower.

Also, your game crashed on me when I got a game over, so I'm not sure if that's just how you programmed that or if that's a problem. I don't know.

All in all though, I had a good time with how well your game worked and how it looked. Keep up the good work!
Reply
b

Thank you for taking the time to try the game out. Your support means a lot to me!

All the missing features will be fleshed out in future releases once the basic game mechanics are polished, so stay tuned.
Reply

Game Graphics Mechanics
Nice work here! The only thing that I found its a little bit annoying its the audio effects when shooting, when I was killing the boss, I had to quit my headphones!

Maybe you can add more visual feedback, like screenshake when destroying enemies, or flashes when shooting.
Different animations patterns on enemies I think it would be cool too.

You can check games like R-Type to see enemies patterns :)