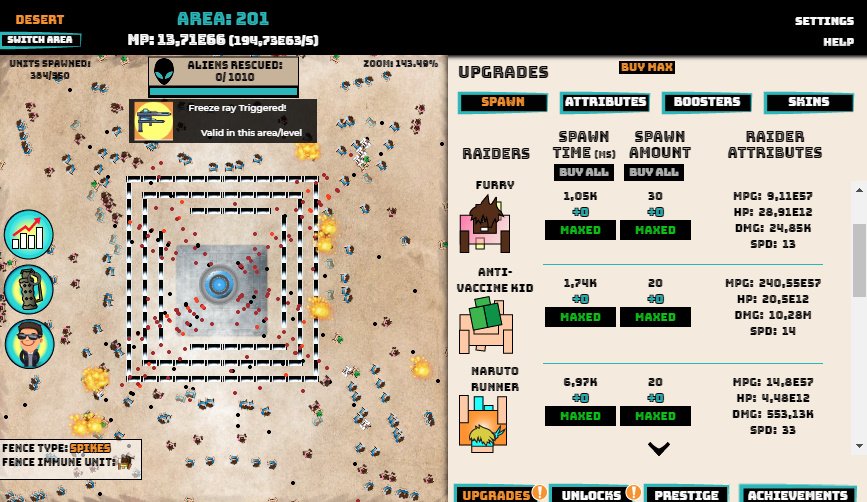 Area Raiders is a free-to play tower-offense idle browser game where you find youself on the side of raiders trying to breach the government defenses to save aliens they kept away from us!

The game was inspired by the actual annoucnement of the Storm Area 51 Event and it now showcases/simulate the raids of naruto runners, furries and other raiders trying to breach the defenses.

Mechanics UI Graphics
I found this quite fun and relaxing, the little tutorial tool tips were helpful in getting started and I found myself playing longer than I anticipated. The UI was somewhat daunting at first but it didn't take long to get into the swing of things.

The UI felt a little cluttered sometimes and I think with some tweaks to this the game will feel more polished. For example, the zoom readout could probably be rounded down to an integer, which will free up a bit of room.
I kept on finding myself looking at the base to try to work out how many aliens were left to be rescued rather than the bar at the top of the screen. If you could find a way to put this information on the base it would make the UI less busy when looking at the action. It might work to try using alien heads as counter icons on the base and find some graphical variation of them (larger, red etc.) to denote blocks of 10 and so on.

The graphics for the runners could benefit from a few extra keyframes to give the motion more impact. I think it would also help if they rotated to match their trajectory. (Permitting a little rotation of the sprite as they walk might be a good method of improving the animation without a lot of work as well.)