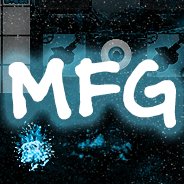 Okay, here goes:
1) Continous moving after button push - bad, should be only when button is down
2) Continous soohting with no control over it whatsoever - bad, should be on-click
3) Give attacking squares different shapes and colors based on their specs (movements speed etc).
4) Give enemies a different specs: move speed, hp, shooting
5) Make it so a player can proggress a level in the game, not in the menu
6) Add an Exp bar on the screen (top/bottom of the screen)
7) Give a player qucik menu to pick an upgrade on level up like^ bigger bullets, more dmg per bullet, more fire speed, more movement speed, bullets the slow down enemies, bullets with aoe damage etc
8) Change a player's turret color/shape on every lvl up a bit (or per every 2/3 lvls at least)
9) Add simple efeects on turret level up, on enemy hit and die, on turret's shot

2) Music should not stop, loop it. Also there can be really short few tracks (or same track with more instruments, or same instruments should just change their filter params, become less muffled and stuff like that) that will change along the progression of the game, so a player could hear when have reached a new stage, that he didn't before.

3) Blocks decoration - optionally you can add a mouth to a "face set" of every block to make a wider range of expressions.

3.1) Animate block's face expressions, like when a ball hits the block he squints his yeys, when a ball is really close he makes scared 0.0 expression and so on, and when a ball passes below not touching the block the face will mock in it's direction be pulling it's tongue or something like that).
Also we need a sound when a ball hits (not kills) the block.
Also while in idle state eyes of blocks can track the position of the closest ball towards them.

3.2) Default/idle face expression of the block can be based on it's durability number: weak/scared/humble expressions on 1-3, poker face on 4-5, serious military-like face on 6-8, "fukk yeah" face 9+ and so on.

4) Make one-timed "abilities". Right now you have only one - +1 ball to clip size till the end of the game.
Make more frequent but one-timed abilities, Those could be picked up by player by hitting with the ball the icon of that ability (same way like you have now), or a certain random block only in some particular turn must be struc at least once to get it. And so that abilities appear random just for one turn in free space or "in the block" for player to have a chance to collect.

4.2) The abilities themselves can be:
a) super-ball, 2 dmg per hit
b) ghost-ball goes through blocks hitting them per time period (so the underlying tough blocks can be reached)
c) rubber ball, extra-bounciness
d) shrapnell, instead of 1 - 2-4 much smaller balls is being shot
e) wavers, spinners (balls moving trajectory will be not straight but in a sligh sinewave or a spiral-like)
f) time-stop (no new blocks appear on the next turn)
g) demolisher (destroyes the first block the ball have hit)
and so on.

5) Also the ball should never lose it's bouncing amplitude completely, when a ball in the end just lies down on the block and gets removed is kinda frustrating. At least make it explode (with animation) and do one more damage point to the block he rests on.

With all of the stuff above this game will be awesome.

Heavy lags when there is 6-7+ bees on the screen. Recoil could have been a bit less punishing. Controls on Num 8,2,4,6 is really bad, if you don't wont to use WASD for some reason, use Num5 for downward movement, not Num2, or better yet relink for Num5 - up, Num2 - down, Num1/3 - left-right, so the hand of a player dont lie on the keyboard much :)
A 25%+ bigger area for moving around would be nice, new enemy types and so on...
Not bad for a start, keep it up.