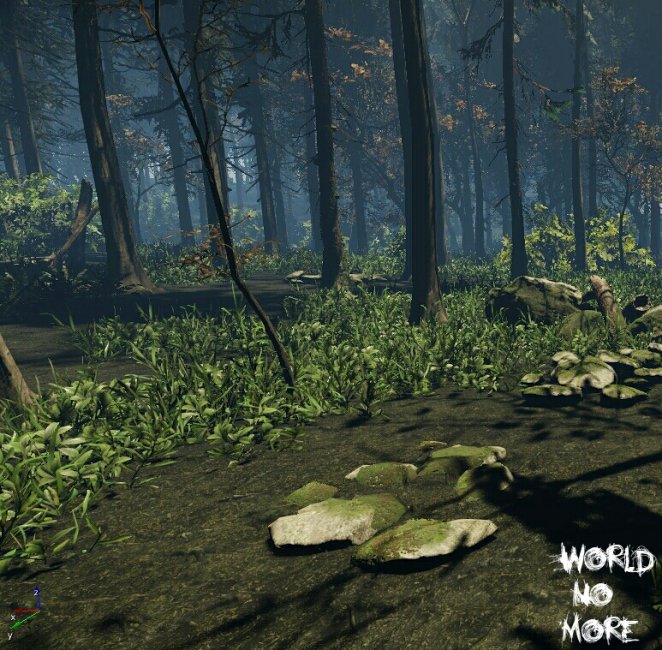 World No More is a open-world survival horrror video game. Set at the beginning of the undead apocalypse, the player is involved in a ship crash off the coast of Madagascar in the fictional country of Swaras, and saved by a small group of survivors that have taken refuge at a place called the Lost Temple and made it their Shelter. As society is beginning to fall apart, the player must organize a handful of allies, work on fortifying The Lost Temple into a livable long-term shelter, scouting for food and supplies, making uncertain alliances with others, and attempting to hold together a group as humanity teeters on the brink of extinction. And although the undead lurk as an ever present environmental threat, the biggest obstacle to the player are other humans with the same goal: survival at any cost.

Humanity is overrun by a vicious epidemic, scavenging the world for supplies and crafting weapons to defend against the growing infected population with a heavy focus on parkour mechanics, allowing players to perform actions such as climbing ledges, leaping off from edges, sliding, jumping from roofs to roofs and zip-lining. Parkour mechanics also applied on combat. Players can perform action such as drop-kicking when engaging combat with enemies. A grappling hook is also featured in the game, allowing players to climb up buildings and travel between places quickly.   The game is mostly melee-based with the majority of fighting using melee weapons. There are more than 200 weapons that can be used and more than 3000 weapon possibilities when players begin crafting new weapons. The melee-weapons have a limited lifespan and will be degraded and eventually broken if the player uses them for combat for a long time. Players can repair a weapon a limited number of times. Crafting weapons require crafting ingredients such as gauze and metal parts and a blueprint, which can be scavenged or purchased from a shop. Guns are also featured in the game, but players will only gain access to it in the later half of the game. However, ammo is often very scarce.

Players can operate several vehicles that is scattered around town. Not only would this provide the player with a means of transportation but it would also serve as armour of sorts. Luckily the player could create new vehicles out of parts of previously demolished cars. A female mechanic could also put new parts and items on cars that would be more powerful. But not every area in the game is drive able.

Game Graphics Mechanics
Why make a zombie survival game? It's the literally the most generic premise for a game I can possibly think of. People will be bored playing it and you'll be bored making it.
Why not try making something a bit more unique? Treat yourself! Go wild! Make the game of your dreams! Forget what everyone else is making, focus on what YOU specifically want to make and what you bring to the table that noone else can. Get bold and get personal. Do it. Dare you. Don't make another fucking zombie survival game.
Reply

A Shawn Story follows a morning in the life of Shawn, a 20-something office worker who is late for work, AGAIN! Enter the narrator, a sarcastic British man who tries to dictate Shawn's life, although depending on your choices as Shawn, the narrator may help or hinder in this comedy 2D choice making game.   "...it is the presentation of the story that really sets the entry apart from the rest of the Greenlight entries..." - Sanji Himura, The W2 Report . "BEST GAME! 10/10! THE NARRATOR SOUNDS HANDSOME AND SMART!" - The Narrator, A Shawn Story. "Wait, I'm supposed to say it now?" - A Homeless gent who we paid 25 pence to get a quote.

Action Priest is a First-person action adventure game based around a Priest who starts a long bloodline of Priests which all portray the mannerisms of classic 80's action heroes, where demons rule the land and your bloodline must 'finish what Jesus started' (the main motto) which means to cleanse the land of demons.

Adventure Boy is a classic childhood game . You will get exciting experience of killing and defeating enemies and get survived. It combines the old school play and new arcade elements. This is the most challenging adventure! Take you back to your childhood!Became Adventure Boy and start killing enemies to get survived. Collect coins, life, bullets and list yourself in Adventure Boy leaderboard.Amazing features of Adventure Boy:+ 30 well-designed levels with boss fight+ 5 amazing characters+ Mind-blowing animations and in-game graphics+ Different world themes+ 15 Challenging enemies+ Game Services added with achievements and leaderboards+ Share with your Facebook friends and get rewarded!+ Easy touch game+ Offline games - you can play Adventure Boy without internet+ Collect large amount of gold coinsWe're working on more levels for a future update so relax, and let’s take an adventure with Adventure BoyDownload Adventure Boy now for FREE and enjoy!