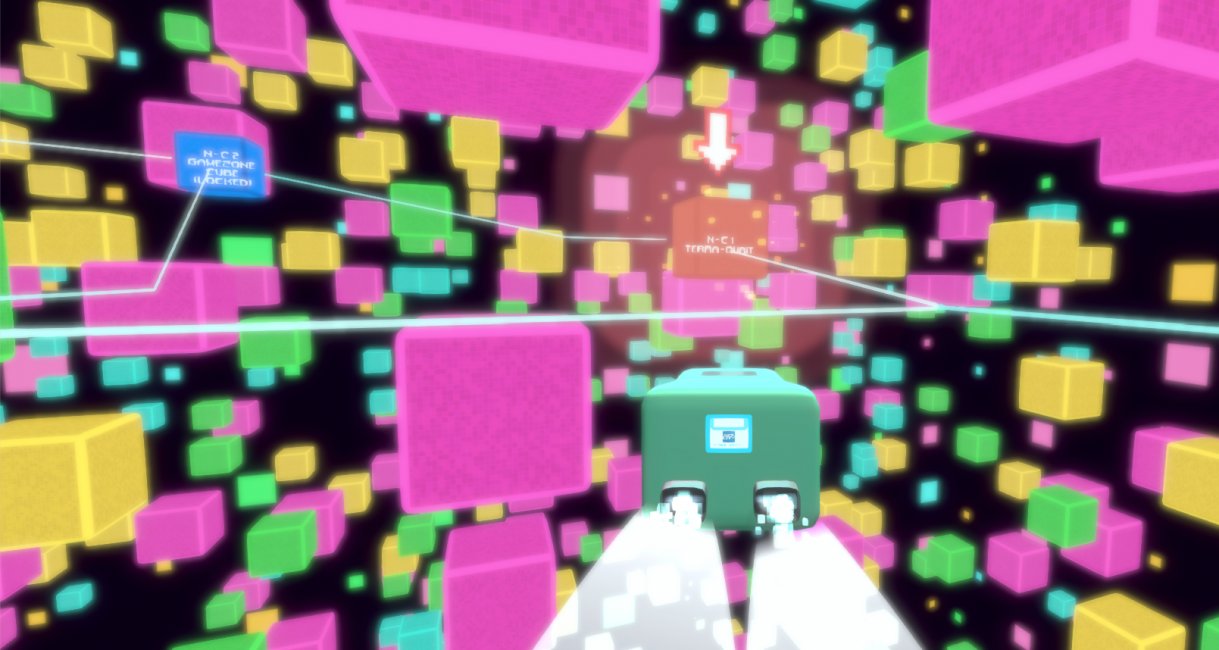 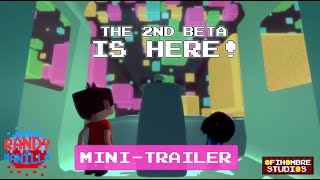 Eng: Randy & Manilla is a game where is discovered a mysterious quantum cyber-universe hosted by Net-Cubes that contain virtual worlds with various genres of games.

In the year 2142, inside the mysteries of the quantum supercomputer created by Lambert Wilson, there is a cyber-universe surrounded by brightly colored cubes called Net-Cubes. Within them, they hold fantastic virtual worlds of pixelated and abstract structures. It is free from threats like hackers, cyber-spies and corporate and government organizations. But that doesn't mean that they don’t have their own dangers surrounding them; such as the villain of the red Net-Cube: Cracksom Virus. This dominant virus is putting all Net-Cubes in danger of being permanently eliminated, so he can expand his empire of computing corruption to the real world, abandoned by humans.

Then, a messaging algorithm called E-Mailer arrives at the world of Bloxland Qubitown, the Randy and Manilla’s home, giving them an urgent warning: the entire cyber-universe is in grave danger of being destroyed by Cracksom. He knows that they are the only ones who can stop his great threat. And so, they accept the mission and embark on a great adventure through all the different Net-Cubes. E-Mailer will also come along and open portals so our heroes can access the new worlds.

Months before, with the Early Beta, we thought it was decent enough to be the last demo.
However, after several reports with bugs regarding jumps, camera, etc. I realized that I was wrong. Although in the previous beta it polished many details, it also left many others to polish (and the worst thing is that they were even important parts)
That's why for this 2nd Beta, There has been a lot of focus on trying to polish all the details we could find and less on adding new levels.

This list is somewhat longer than in previous articles, so it will be better to list them by numbers and order them from generals to from each specific Net-Cube:

1. More graphic updates (like the Net-Cubes, E-Mailer ship, Manilla hair look, etc.)
2. Changed camera in the first Terra-Qubit levels
3. Qdata previews in the pause menu
4. 6 new soundtracks & two recompositions made by Marcus Wood, Kaaliu, Gamelody & Michael Martel
5. Added 4 more stages (include one boss)
6. Small improvements on the UI buttons
7. Ship controls for keyborad & gamepad are now by default
8. Camera drift in gamepads are now fixed (at least from Xbox One)
9. The characters has greater mobility through the air while performing the jump in 3D levels
10. Fixed harsh brakes when jumping (only if while the HP is greater than 1)
11. Redesigns in certain parts of the levels
12. The max score is slightly lower for levels that require it
13. better handling of sorting layers
14. Added a button indication for fast text in the dialogs
15. More polished details
16. Samuel Domínguez Cañete as Randy Qubit
17. The button for Randy punches can be pressed twice to perform combos
18. The checkpoints are now healing points
19. When a character into the void, it returns to the near position before the fall. But it loses one HP
20. A red fading was added if a character die
21. Buttons have been swapped between jump and fire/kick in gamepads

Terra-Qubit:
22. The net-points for the objective from level 1-4, has been changed by corrupt bricks
23. The Golembrick Boss HP reduced from 50 to 40

Gamezone Cube:
24. Both Randy and Manilla as NPCs will stop following the player for then go towards the arcade controls as they get closer

Rol & Rogue:
25. Randy can give up to 2 hits with double punch
26. The HP from many enemies it has been reduced
27. Enemies can no longer do burst attacks (specially with Manilla)
28. Manilla no longer takes damage while an enemy is spinning from very close distanse
29. To each battle, the icons of the attack buttons appear
& more

Thanks. But I think you should have first played the game to downvote the controls, did you? (although I'm finding out in this part to improve).
Reply
J

Level Design Game Graphics
The level design looks great especially with all uses of colors. My only complaint is the design of the guys face. The girl's head looks more normal than his (which is like a block head, reminds me of minecraft).
Reply

Thanks for you roast, but his complaint about character design is too superficial and poorly analytical to be conclusive.
You are only criticizing Randy's head for being square, I would recommend that you better try the game demo and you will have a better analysis of character design and even gameplay (since a critic based only on images and trailers isn't enough).
Reply
G

Game Graphics Controls
The game looks good but the controls are a little hard but that may just be me.
Reply

Many thanks to the roast Grady. It show you have played the game when you talked about the controls, although there may be some mechanics that you haven't known how to use, in general I'm more than in agreement (like the characters movement, or the camera sometimes).
The next Randy & Manilla update what will come (as much the next year), it will come with some improvements in controls and some polished movements, but above all it will have compatibility with gamepads, and here the experience would be even better.
Reply
L

Level Design Controls
Nice work! The game design, from the main map, which allows entering a cube, which in turn allows entering levels, is quite nice and looks to me like Donkey Kong-style games. The levels are also challenging enough to make them fun.
The story is original too and I appreciate the graphics are all artwork (at least I think so) so, a very original game!

The downside is game controls and some minor UI issues which I list below (it doesn't mean that everything is bad here, I just want to provide some feedback to help improve the game):
- It is sometimes hard to jump into a block although it is manageable
- The camera movement is non-standard: most games nowadays allow moving the camera without clicking any button, and definitely not by using the left button. The camera movement is also not very fluid.
- It is also non-standard to talk using the mouse right button and it is hard to find the correct spot to click to start a talk.
- The music volume on the credit page is too loud compared to the title page and the rest of the game.
- The load button should be disabled when there is no game to load. Also, I miss that there are no save slots, nor autosave (or am I missing something?)
- There are two graphics quality settings: one at the Unity start window, and one inside the game. They do not match. I chose Ultra from the game settings. Then I restarted the game in "Fastest" mode, yet the settings menu inside the game showed Ultra.
- I have two screens. When the game is in full screen using screen 1, it disappears when clicking on screen 2, meaning that screen one shows the applications originally below the game.
- It would be nice to have an option to lock the framerate as it seems a waste of power to use a RTX graphics card at 100%
- CPU usage is almost the same between low graphics and ultra graphics. Maybe consider removing some objects, like trees, or some unnecessary logic to allow low-end laptops/PCs with slow CPUs to still play nicely.

Other than that,
Very good job and good luck with :)
Reply

Hi Levonox, many thanks to play Randy & Manilla. The points that you took into account are things that I have in process but at the same time I hadn't noticed, I will say what I think and how each of them could implement it:

1- With the character standing still, you can move a bit while jumping, although that doesn't help either. I understand that this is also influenced by the speed of the jump and also by the slow turns.
2- I planong for future versions to have an automatic camera for when you turn the character while walking and the current manual for advanced camera settings.
3- The talk indicates the button, it would also be nice if there is another button to talk easier to find. But I think it would be much better to program the game to be played with gamepads (and I have that planned too).
4- The credits music is for now a placeholder, and it will be here until I have an improved version.

5- It even seemed strange to me that at the beginning, the load button doesn't work without having saved before.
Maybe I could put a message that says "You don't saved the game!", and that it comes out shortly after pressing the load button.
I could also implement autosave.

6- Another strange thing. That is translate to me having to port the entire project to the updated versions of Unity (where the graphical startup configuration was removed). But I am afraid that certain codes and elements will break when I bring it.
Randy & Manilla started being developed from Unity 5.4.2f2 (from 2016), and when passing it to Unity 2019.2.9, all the javasripts no longer worked and I had to change them all to similar ones in C#Script.

7- It's another detail that I have not taken into account either, but I'm not an expert in screen configuration.
8- I would try to solve it by setting it in Vsync, but it's of little use.
9- The least I could put in would be the occlusion culling. But it only saves a few frames in levels with a lot of polygonal detail.

I think I could understand most of the points better if you bring me screenshots or gameplays with the game problems that you describe yourself in your roast.
Reply

Game Graphics
NOW THIS is an upcoming masterpiece. Loved everything keep up with it. You might want to check my game too^^
Reply

Thanks, I will try your game, but you should also try mine too.
Reply