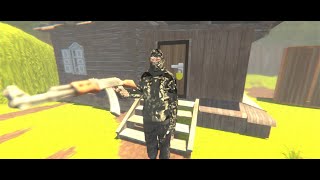 This is a game that is highly inspired by the game Hello Neighbor by TinyBuild but even more inspired by this comment(scroll down to "Make this into a horror game i would definitely play it").

Also, this is just a short 5-10 minute game to complete.

You play as a curious hiker who found himself in the middle of a forest with suspicious looking houses, just like the story of Hello Neighbor, you immediately get the instinct to find out what's wrong. You noticed that you aren't alone there, there seems to be a man in a black suit carrying an AK-47 in his hands. He doesn't seem to behaving normally, so you try to throw AK magazines that was lying on the ground and he seems to be following it, which gives you the chance to investigate the houses. The story isn't really complete yet, and it doesn't really make sense from this point.

Find out what secrets lies in the houses in the middle of a forest, collect items scattered around the environment and use them to unlock certain passages such as locked doors, barricaded doors, put out a flame, and more. Sneak trough the wild Russian to investigate, hide under tables, inside closets, and throw magazines to distract him. The environment isn't the prettiest to look at, i know. But at least i get to play around with AI for this game, and like, LOTS of AI coding...

Agh! Finally done with this game. Now i can go back to work on KARLHOT which is going to be a crossover fan game about the games KARLSON and SUPERHOT.

Follow these steps if you don't know how to unzip a .zip file

Hey. I played this new game. I love it. It scared me a lot of times. Also, I made a video about the game. I hope you like it.
https://www.youtube.com/watch?v=gWX8JgOFp1s
Reply