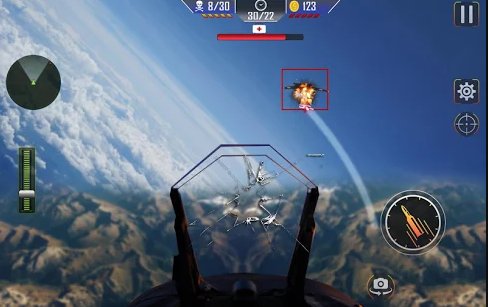 Mission games presents offline modern warplanes game to play and enjoy the real feel of flying fighter jets force. As fighter pilot fly fighter jet for ace combat with enemy planes. If you love to play fighter jet ace games and to become profession aircraft pilot for free then you are at right place just install this modern warplanes force game and ready for 3d air strike on the border. Also your mission in this jet fighter games is to fly jf16 for terrorist bunker shooting. In different challenging levels your mission will be different, firstly you have to do border strike in the space and avoid counter air 3d ace jet attacks.

Air force combat in the space with modern jets plays an important role in the wars. Now modern ace jets with critical war mission are available to each country’s airforce. To become jet fighter pilot force is not an easy task you have to play dog fight in the air, avoid enemy jet missile. And wisely target the tail of enemy jet to destroy it. By playing this jet fighter simulator mission games you will get real experience of flying Ace jet fighter. Gunship helicopters force are also available to destroy enemy and terrorist bunkers and check posts. You will become expert helicopter pilot and jet pilot force by playing this addictive Jet fighter game.

Now, what are you waiting for ace?? Just install the jet fighter force game and enjoy the all the above listed features. Also become professional pilot by playing this jet simulator game for free. Don’t miss a chance to play offline jet simulator game and to perform surgical ace aborder strikes in the air. Good luck JetFighters force…

Game Graphics
Good game made...
Keep it up...
Reply
W