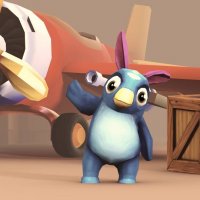 You are a prabbit (mix of rabbit and parrot) that needs proving it is the best pilot in its class by winning a last man standing tournament. Beware your ammunition and the perm death bombs!The rules are:1) you need to win 5 rounds to win a tournament2) to be killed by a perm death bomb eliminate you from the tournament Hence, even if you have no victories, you can still make a twist and win the tournament by using successfully a bomb. ControlsUsing a XBOX360 controllers, the controls are: - Left/right to turn anti-clockwise/clockwise, respectively- A to shoot a bullet- B to shoot a bomb- X to buy bullets- Y to buy a bomb Using a keyboard, you can play up to 2 players locally: - A/D or left/right arrows to turn anti-clockwise/clockwise, respectively- C or ' to shoot a bullet- V or ; to shoot a bomb- B or L to buy bullets- N or K to buy a bomb

I tried to play the game, the graphics look great and although I could only read the first dialog, the story seems to be interesting and well written :) to be confirmed on the long run :P !

However there are some aspects that are impeding the playtesting I am afraid:
- when the game starts (after the dialog), it seems that the controller is not always recognised; I had to press the arrow keys of my keyboard before I could move with my XBOX 360 controller
- I was very surprised that I couldn't move and shoot; it took me some time to realise that I had to use the same stick to move and aim, while in most games I played (twin shooters) one stick is for moving and one stick in for shooting
- maybe there could be less enemies during the first fight, as this fight should be the opportunity for the player to try the controls :)
- when we die (I die after the first battle); it takes too long to go back to the start of the game; could you add an option to skip the control scheme screen and the dialog? or make a checkpoint ?
- bug: if you try to press the button A like crazy during the dialog, the dialog terminates early and the dialog window stays on screen (I took a screenshot, but I am not sure I can upload screenshot here...)

I hope that helps.