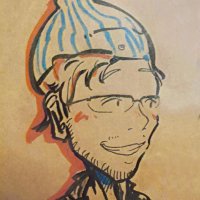 Really like the minimalistic graphics of the game, it just took me about 3 seconds to understand everything and get started.

But I feel like there could be some improvements! For example when hitting the middle ball you could add just a little screen shake to give it more impact. Maybe even adding a droplet circle when hitting it? Like when dropping something in water, it might look cool!

Also if possible maybe have the colors gradually change when hitting the middle ball? Right now they are changing when you "kill" one ball, but I think the player might feel more progression if it would lets say start at green, but then become more teal and then finally becoming blue when it's killed.

I also would suggest always to try having one color as the starting color and test it with people. It might make them annoyed since it feels like they are starting over, but it might also make players feel like they are recognising the progression ("Ah! I got to red this time!") instead of just mindlessly restarting ("How many times have I played again?").

As for the controllers I also suggest some sort of indication on the sides as there is so much space on the left and right which could be used. There were a couple of times where I pressed on the right side of the screen expecting the plate to go right, but then it started going left instead. Maybe you can have a right and left < > (with a minimalistic icon corresponding to them) above the plate and have the icons appear on the left and right as well so you're not getting as confused.

Overall 4/5, its great but it just needs a bit more polish. Right now it kind of feels like a quick but awesome project made by a programmer, but I think the polish can make it feel like it's something more?

Hah wow, I came in here thinking "ah I have to write something to put up my own game", but then when I played your game I just found it so fun and got really into the writing. Glad that I could be of help! Will make sure to checkout the update once it's out!