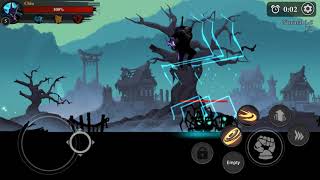 Stickman Master: League Of Shadow - Ninja Legends is an offline game-to-play shadow style of stickman fighting games, a great combination of action, role-playing game (RPG) - a stick game without connecting internet.
Plunge into the ninja shadow battle, you will be brought to an epic fantasy shadow of war, have to face against many cruel zombies, evil monsters and mighty enemies.
Get ready to be the bravest shadow heroes of Stickman Master: League Of Shadow - Ninja Legends and be the King of Shadow!

FIGHT TO THE END - OR DIE!
Incarnate into the brave shadow warrior in the RPG DEMON 2, you need to control the stickman heroes to combat, fight and use sword to kill zombies and monsters in each level, they will attack whenever they encounter . Remember: Shadow monsters are unlimited. Not only you combat ordinary monsters, but you also have to fight to survive with cruel bosses with extremely tremendous damage and dangerous skills. The legendary stickman shadow combat in this stick game - RPG Stickman Master: League Of Shadow - Ninja Legends has opened its doors to welcome you.

Game Graphics Tutorial/Learning Curve
I absolutely love the graphics, animations. and music This looks like a really fun game and has a lot of potential. Nice job!
Reply

Wow, thank you so much. We hope you will play our Stickman Master :D
Reply