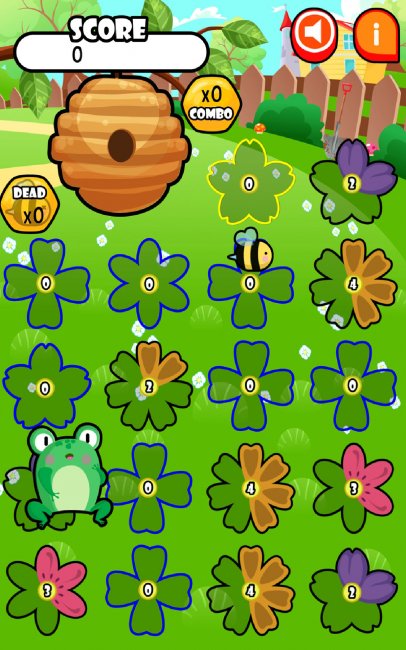 The hive is in need of some good workers. Get ready to avoid the frog, since all they want is to eat some tasty bee's.

Game Graphics Tutorial/Learning Curve
Before I go into any detail. I think it's a cohesive game that follows a cute and creative idea which it executes well but leaves room for improvements in regards to its onboarding and teaching of its main mechanic. :)

My first point of confusion was as to how the main mechanic works, I did not intuitively know what any of these flowers and their numbers represent until I pressed the information button stashed away in the top right corner (On the side, this position is not very accessible on mobile devices.), which is why I lost a couple of bees in the first few rounds. I think you should convey this information sooner and potentially more automated and hidden (for example through clever level design), as the main mechanic feels simple enough for the player to just jump right in.

Another area of improvement, for me, which would also improve the learning curve, would be the highlighting of the flowers. The yellow that you choose was rather difficult for me to notice as the background that it's on is a bright green, especially when the highlighting changes. All of that in contrast to the strong blue that you utilise when a flower has been completed. Seeing as you highlight the bee in yellow when it's finished working I also think that you should reverse the highlighting, so make the flowers border blue when the bee is allowed to visit them and yellow when they have been visited. This should look more cohesive with what you already have but this colour choice would also communicate a nicer feeling of completion as yellow is quite the cheerful colour.

Last but not least, I would like to be able to mute the game while the bee is talking to me.
Reply

Thank you so much for your feedback! Solid advice all around, I'll make an update with a better intro tutorial and colors!
Reply