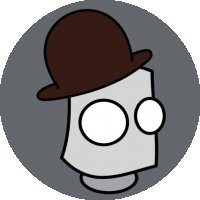 Game is now released! Thanks for all the feedback!Go to http://ifallingrobot.com/ to check it out.========================================A classy game inspired by the golden age of silent film. Play as Charlie the Dapperbot (an extremely dapper robot), as he falls from a great height. Dodge, swipe, and tap obstacles to land safely. Progress through increasingly difficult levels, each based on piece of classical music. Challenge yourself with multiple modes of play, achievements and leaderboards.Download Note: Open beta is hosted on Google Play. You will need to opt in with your Google Play account and then you should be able to download the app like you would any other app through the Google Play store. If you hit an error makes sure that 1) your logged in with your device's account 2) Google sometimes has a delay between opting in and allowing the download, give it a minute and then retry.If people have issues with Google Play I'll post a direct link to the APK.

On the positive side, I think the graphics are really unique and nice. Reminds me of Relentless from the 90s (https://www.gog.com/game/little_big_adventure). I also really like the biomes you built out for the game.The only thing I would criticize with the graphics is the hole obstacle are a little too subtle and aren't obviously an threat. The first time I fell down a hole I had no idea what had just happen. I would make the holes more pronounced in the environment and make the falling animation more obvious, right now it kind of looks like you are just rolling back.

I think the core problem with the game is that the objective / purpose of the game isn't very clear. From a first time player perspective , you drop the player in on the first play with no tutorial or explanation. The larger problem is that you aren't really given an objective as a player. If the point of the game is too explore it would be nice if that was contextualized better in the game. Maybe add a "fog of war" style effect that the player can remove as they explore. I think basically you need to add more feedback that the player is accomplishing something and doing well besides a counter at the top of the screen.

Other things I noticed. When the player dies there is no animation, the menu just comes up but the robot is still there in the world getting hit by things, I would make death more of an event. Maybe make the robot explode and have the transition from the game screen to the restart menu more pronounced. Also your leaderboards don't appear to be working. There was nothing there when I looked, included my scores.

Hope this is helpful, good luck with your game.

Here are some thoughts I had while playing the game:

* There are a lot of scary looking permission pop ups on start under Android 6. Do you really need access to my microphone and all my photos? This could just be Android being poor at explaining the permissions.
* The presentation of the game is pretty overwhelming some times. There are tons of prompt and pop ups, especially when playing for the first time, that maybe could be spaced out a little more.
* More on the first time experience, maybe defer asking people to create account until after a few games. Last thing I want to do for a game I just downloaded is make an account.
* Art style is great and the rag dolls are fun.
* Game is simple to understand and fun.
* Are ft your currency in the game? This is extremely confusing, what is buying ft? I was trying to figure it out if it was the feet I pushed back the opponent when I shot them, but then the coins add to feet?

Overall I had a positive impression. I can't see myself playing this long term, but I had fun with it in my play session and I'd like to try the local co-op when I had someone else around.

Note: I put Physics down because I really don't have much negative to say about the game.

I am sorry that I don't have much in the way of constructive criticism. I think everything in this game is really well put together. Obviously you guys are professionals at this.

My one concern is the monetization of the gear. I haven't gotten that far in the game, but I would probably stop playing the game rather then buying gear. Sorry if that sounds cheap, the game is great and deserves to be supported, but it's just a hang up I have with IAPs for in game gear. I'd rather pay you guys a price up front to get a well balanced experience from start to finish. That being said, I haven't hit this particular issue with the game yet.

The advantage something like Crossy Road has is that you are just moving in one direction and it's very clear that you need to just move in that one direction, whereas your game allows the player to go off in all direction. I was thinking as I played it that a good way to contextualize it would be make your robot a planet explorer, like the Mars Rover. Mars Rover job is to go around and explore the planet and collect anything interesting.

I also made a game about robots, check it out if you get a chance, https://roastmygame.com/game/i-falling-robot.

Thanks for taking a look at the game, I appreciate the feedback.

Thanks for the feedback. You're right, I set out to make a very simple mobile game as my first game, sorry you thought it was too simple. I don't know if I agree with you that more complexity is inherently a good thing, for instance, as much as I enjoy Doodle Jump I actually think the shooting mechanic adds nothing. Anyway I appreciate you taking a look.

I agree with yc960's feedback. It feels like the game tosses you in the deep end before I even understand what the game is about. Is it a stealth game? How do I effectively sneak by drones? What does the space bar do near a drone, is it an attack? If so it should have some kind of animation associated with it. Basically, I don't think your tutorial is doing an effective job of teaching a new player how to play.

I think you need to revisit your tutorial level, make it less of a tutorial gallery (for lack of better word) and more of an actual level. Introduce your mechanic gradually to players. I think it would be good to sit down with some new players, give them little to no prompting and see how they deal with the tutorial / first level. Based on your reply to yc960 it seems like you are making a lot of assumptions about what a first time player is going to be able to pick up on. It's difficult, because you have the game mechanic completely internalized, but you need to get yourself in the mind set of a new player and teach them your game effectively.

On the positive side, I think the presentation of the game, while it still feels like an Alpha, shows a lot of promise. I think a stealth game like this could be interesting and I would like to check out the game again after you revisit the tutorial.

Follow up question for you. Did the controls feel too sensitive / not sensitive enough? It's been hard to balance the sensitivity across different devices.

A touch panel to move has been brought up by a few other testers, I think for better or for worse, the game mechanics are really locked into using the accelerometer. So I think it becomes a matter of adjusting the initial settings and the difficulty of the first level. Hopefully I can get them right :)

Thanks for the feedback. It's been a struggle to get the controls to feel right and I am still tweaking things. But I am glad to hear that you enjoyed the game.

I ended up rolling my own for my page http://ifallingrobot.com/. But it will be nice to have these for future projects.

Thanks for the offer. I actually did have a replacement image that I wanted to use but I can't seem to find it now. If I dig it up I'll post it here.

Regardless, it would be a great feature to have in the future.

I didn't have a lot of time to sit down and play this tonight but what I did play I really enjoyed.

I made it up to lesson 9, and I have to say the mechanics and the look of the game are excellent. You have a really nice Super Mario Bros 3 thing going on without being too deliberately retro. I also think the pacing of your tutorial sections is excellent, there is some real clever obstacle placement to force the player to perform the action you want.

Minor feedback, I think you should make the controls clearer at the beginning. Maybe have them appear in the game world as you need to perform certain actions. Especially the key needed to read the signs.

I'll have to revisit this later, but I liked what I saw.