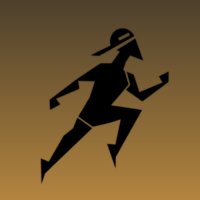 Darkour is a 2D platformer where darkness is your platform. In Darkour, lights are alternate playable spaces, the skill ceiling is high, and you will experience a new method of traversal.The demo version of this game has 40 levels.

1) None of the text was overlapping and was just the right size.
2) This may be a little biased since I'm making a challenging platformer of my own, but it didn't seem off-puttingly difficult. I did die a few times, but the short length of each level helped to alleviate any frustration I had.
3) I felt like I understood all of my movement options and when to apply them. As for how my options could've been explained better, it's usually better to teach the player through the level design and with as little text as possible. However, in this case, since the text is coming from a 4th wall breaking character, keeping the text as is may be better.

Outside those three points, the only other thing I'd say is that I'd like for the screen shake to be toned down a little, but that's just me.

So if you want to improve your controls, I would suggest following some of the advice in this link:
https://www.youtube.com/watch?v=vFsJIrm2btU
I realize that you're using GameMaker instead of Unity, but I think the same principles still apply.

I also might've ran into a bug where, when I try to run off of a moving platform, both me and the platform get stuck unless I jump or stop putting in input: https://gyazo.com/ff9aa3ca48f908a54547bab8ea0ca3ce

However, two more things I'd like to point out is actually about the level design:
1) I don't like how in some rooms, I can't see the bottom unless I jump down. It's especially bad if I jump down and land onto an enemy, a projectile, or worse, one hit kill spikes.
2) Not sure if you'd want to change anything about the boss, but I managed to get the boss in a position where I can shoot the boss, but the boss can't shoot me: https://gyazo.com/f82f146304243a620d3ea560915b55b1

Thank you for the feedback. I was wondering how I should incorporate different players who use different keyboard buttons to play platformers while keeping the minimalism, but I agree; ultimately, it's better to be clearer about the controls than to show nothing. This is especially if I'm going to show the player how to perform different jumps. You could also try to play the game with a gamepad, since I wanted it to be compatible with controllers, and I've been told that plenty of people prefer controllers for platformers. If you decide to use a controller and it doesn't work for some reason, let me know what you used.

For the goals of each level, It shouldn't be too hard to change them to make them more fair.

For clinging onto the moving lights, I'll try my best to fix them. I'm sure you'd agree that it's better to trade away difficulty for fairness, if you had to choose only one.

As for the other pieces of feedback, I can fix those pretty easily.

Thank you for the feedback. I'll see what I can do about the level design and the full-screen problem. For the pause menu problem, I'll upload a fixed build as soon as possible.

I also just played through your game, so I'm about to give feedback on your page.

+ It was satisfying to destroy the enemies.
+ I liked having the variety of weapons to shoot.
- That said, I didn't really have a reason to use the spells, as I didn't run out of ammo.
- An issue that I think should really be worked on is the enemies telegraphing their attacks, more specifically the blue enemy's laser beam. At times, I felt like that I didn't have enough time to react before the blue enemy shot its laser, even though I was looking directly at the enemy. This would immediately bring my health down, and in the worst case, instantly kill me. This may be the same for the orange enemy, though not as severe.
+ On the bright side, I liked being able to immediately fight that same enemy again after I died, so dying wasn't too big of a punishment.

So likewise, I hope the feedback helps. If you decide to expand on this, I'll be the one to say that a Monster Hunter like 90s FPS sounds like an interesting concept.