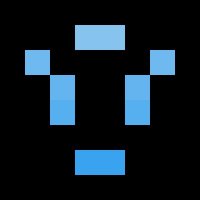 Vavio is a bullet hell where everything is synced to the music. There are 12 levels total, each with unique music and enemy patterns.

So... the first thing that I noticed was how cluttered the main menu was. The bottom half of the screen is covered in unlabeled buttons, and the top half is pretty much clear. The only thing that I could guess the meaning of was the play button in the center of the screen. That being said, I love the aesthetic and the sound of the game, but the controls and physics seem a little strange. Having to hold down on the screen to prevent jumping is definitely different, but different isn't always better, and this might be one of those times. Trying to move left and right feels extremely slow and slidey, which is probably not what you want for a reaction-based game.
A few other nitpicks of mine that aren't as important: the spikes moving at a different speed to the rest of the level feels weird and... off. Why not have everything move at the same speed? Something else that bothered me was the dying animation. It felt like it took too long, or something. I'm not completely sure. The game as a whole seems to lack polish, but the potential is definitely there!

Thanks for the feedback, I'll definitely have to check out Dubmaku, it looks really neat! I'll look into adding bullet trails. I'd thought about it before but I wasn't sure that it would fit. I'll try it out :)

I've been getting a few complaints about the tutorial, I'm going to change it to be an independent level so it's not as chaotic while you're learning. Regarding the difficulty, I get some people saying that the game is way to easy starting out, and others say it's way too difficult. Since the game gets much more difficult as you progress, I think I'm going to keep the current difficulty and appeal to the more hardcore players that might play more bullet hells like this. I'll also look into changing the ability icons. Thanks for the feedback, I'll look at Titan Punk in a bit!

Thank you for the feedback! I'm definitely going to change up the tutorial since I've gotten a lot of complaints about it, and I agree with them. I'm aware that some people have trouble with some of the game's patterns, and I really don't feel that there's a lot I can do. It's a bullet hell aimed kind of for more hardcore audiences that have some experience in the genre, but it's still playable by others. I had a warning in the trailer regarding the patterns and colors, but I'm going to put one when the game starts up as well.

Hey, I saw this on /r/gamedev! :P
It's a really neat idea, who doesn't love being a giant dude that tears shit up? The concept will always be fun, but I feel like things could use some tweaking. Things feel kind of clunky right now in my opinion. Jumping seems really high because I'm not really sure where I'm going while I'm in midair. I feel like you could get away with having the same jump height if you really wanted if you kept the camera on or near the ground when you jump.

Punching feels like it should be bound to a key rather than LMB. If your game doesn't utilize the more fine control that a mouse offers, personally I think it should stick with the keyboard. The punch hitbox feels too small as well. I found myself having to perfectly line myself up with the guard towers to actually hit them. I'm a huge-ass titan, I should be able to wreck stuff without thinking about it!

I think you're going for an empowering experience for the player, so make everything revolve around that feeling! Make him feel like a badass from the very start, and crank up the difficulty by introducing a ton of tanks and stuff. I'd love to see how this progresses!

Oooh, I love this! The idea is super cool, but my biggest issue is that it's too easy for too long! I spend a lot of my time waiting for something challenging to happen, and then all of a sudden I get a bunch of bullets coming in front of and behind me and I die, so I have to sit there for twenty-something seconds again while I wait for it to get more difficult. I get that as devs we know that we make our games too hard (I'm guilty as charged), but it seems like you dumbed it down too much. I want to hear epic dubstep tracks while I dodge a bunch of bullets!

Another very small nitpick I have is that the bullets that spawn along the edge of the circle. You can see them being created out of nowhere, maybe spawn them a little bit inside the circle so the player can't tell :) I hope to see some updates to this!