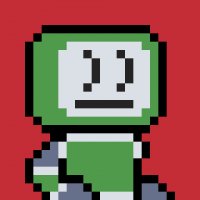 A tough-as-balls platformer where you can jump too much. Depending on the unique challenge of each level, you'll have a different amount of midair jumps you can use. Double jump! Triple jump! Quadruple jump! When does this madness end? This is the alpha build of the game, so there are only 12 short levels. I've been developing this as a hobby since last November. It would be useful to know: 1) Did it look right on your monitor? Was any of the text overlapping or too big (or even too small)? 2) Was it off-puttingly difficult? Despite the game's title, the first few levels still need to be approachable. You are supposed to die a lot, but the levels are also very short, so don't measure your potential struggle with it in deaths, but rather in time taken or progress made.3) Did you feel like you understood all of your movement options and when to apply them? Did you understand everything by the end? How could they have been explained or demonstrated better?Thanks!

From the beginning up to seeing and interacting with that pannel that controls the pool cover, things were laid out in a way in which I knew what to do. After that, I had no idea.

It didn't feel like I was figuring things out, but more like I was just trying everything. I guess it's supposed to be like that up to a point as you take a look around and figure out what you can do, but I couldn't figure out what I could do for too long, so it wasn't keeping me invested. By the time I stopped I'd collapsed the parasols (what was that for?), found the thing in the shed, connected the pool things together, and opened the pool cover further.

Is there a key for the "manual override"? Was that a keyhole below it? I didn't find the key. That seemed like the goal immediately, so if it was then that implication worked well.

No problem. Now could you roast mine please?

Thanks. I can play yours later today.

The concept of this game is very cool. The decision to make it mainly focused around walljumping is clever considering the sorts of shapes you're working with. I played up to level 24.

I didn't know that up was jump as well as space until I figured it out myself. I started out by trying to use space to jump at the start, and it worked, and I was reaffirmed that space was THE jump button at the end of the first level when it said "Press space to continue". At this point I was using the arrow keys and space. Then it told me to press up to do a high walljump. At that point, I thought that the control scheme consisted of left, right, shift, space, and up. This was too overwhelming for me, and I started struggling. It was only later when I tried using up to jump that I realised that up was also jump and it became a lot easier for me. You'll need to explicitly state the controls of your game at the start. I know you want to keep it all minimalist and cool, but you have to tell the player the different buttons they can use, or else they'll guess, and they'll get it wrong. Trust me, I've been there. So show on the screen at the same time that you can use WASD or the arrow keys to move, and W, up, or space to jump. This doesn't have to be on level 1. It can be before it somewhere if you want.

Touching the goal of each level can be difficult. On levels where you have quite a lot of moving through the air before you reach the goal, like level 24, it's really easy to miss it because of the strong inertia in the game's physics. This feels especially cheap to die to since it's right at the end of the level. You should either stop putting the goals so far away (which might not be possible all the time), make them customisable in size for each level so you can stretch out a big area for the player to fall onto, or make them suck you in when you get close enough if you don't want to draw lots of different sprites for different sizes.

When there are moving lights, they can stop you from being able to do things to their walls of light. For example, if a light is moving left, you can't cling to the wall on the left of it because it's moving away from you. There are various other things like this. I'm sure you're already aware of this. I don't know if you can fix it, or if you should, but it made it a bit more difficult and it felt a bit unfair.

It's time for the quick-fire round:

- On level 17 the lights disappear before they fully leave the screen.
- On level 20 the lights can still be seen by a couple of pixels at the top of the screen when it does the transition for when you die.
- The lightbulb on level 24 seems hard to not get.