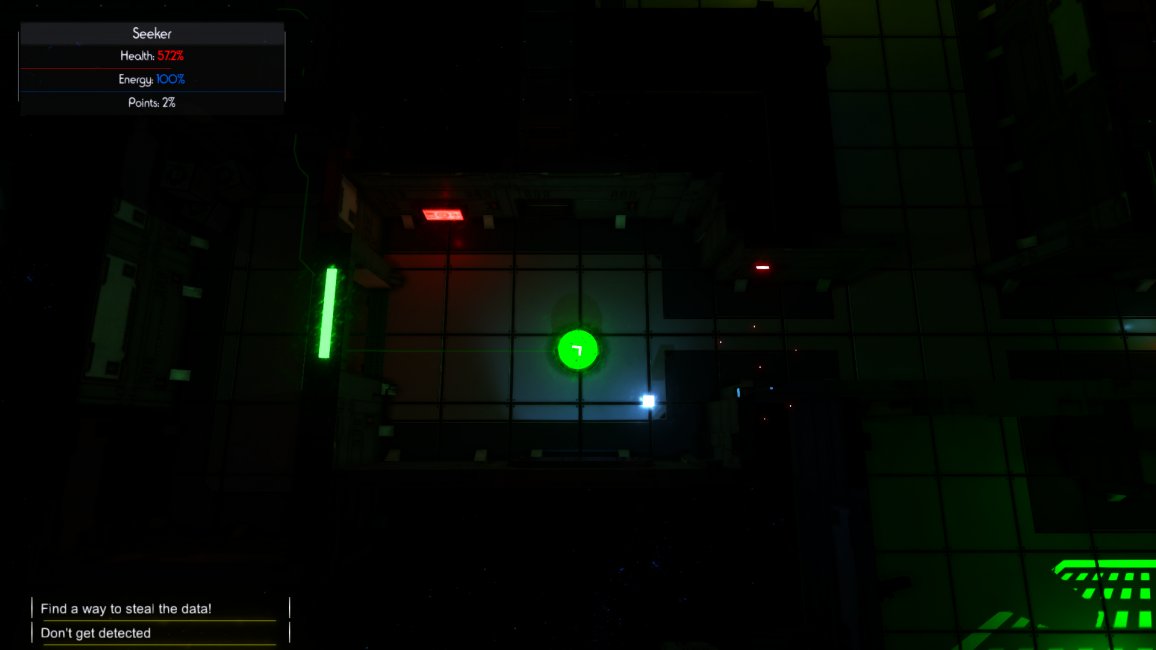 After 3.x months of developing The Seeker, I'm here to ask You, good people all over the world, to determine which game elements should I keep and which to discard. Hence asking for your most valued feedback #roast that would conclude and shape the game as soon, this week I plan on going to greenlight

About the game: You, as the little abandoned drone called: The Seeker, are waken up many years after the Great Galactic War in a simple quest of finding why the AI went corrupt and managed to wipe humanity. This 3D Adventure/Stealth game is inspired by Affordable Space Adventures, which was all about exploring in an unknown areas rather than just finishing the mare goal. Just like ASA, you have to avoid enemies, turrets, alarms and other things seeking to destroy you in this SCI-Fi environment.

Gameplay: Through the game you'll encounter various barriers; Other drones, alarm systems, etc. That will try to slice you in more pieces, the better. You, The Seeker, need to find the exit out of this man made hell, you'll collect points, enjoy the scenery and the music that caputures the essence and the beauty of destruction intertwined with human and robotic lefovers.   Controls (There is a tutorial in game): Basic and simple.

Game Graphics Mechanics
On level after tutorial, the game froze when I died, only after pressing esc did it unfreeze. And I cannot get past the level after tutorial, too much enclosed space and alarm is too easily triggered before I even got a hang of how drones work. Alarm only dispel when you go to hack the spot is very frustrating, I suggest showing me the fun side of this mechanic first before taxing me.
Reply
V

I'm fixing the "Death Screen" thank you about that, however this is the game that you have to learn. Each enemy has its unique patterns, like drones, they have distinct path, and speed.

Cameras, are triggered after 1 second if standing activated and in "live of fire"
And turrets 1 second as well but they can always see you.

However I do not understand you sentence : "Alarm only dispel when you go to hack the spot is very frustrating...," could oyu please elaborate?
Reply

Game Graphics Tutorial/Learning Curve
I agree with yc960's feedback. It feels like the game tosses you in the deep end before I even understand what the game is about. Is it a stealth game? How do I effectively sneak by drones? What does the space bar do near a drone, is it an attack? If so it should have some kind of animation associated with it. Basically, I don't think your tutorial is doing an effective job of teaching a new player how to play.

I think you need to revisit your tutorial level, make it less of a tutorial gallery (for lack of better word) and more of an actual level. Introduce your mechanic gradually to players. I think it would be good to sit down with some new players, give them little to no prompting and see how they deal with the tutorial / first level. Based on your reply to yc960 it seems like you are making a lot of assumptions about what a first time player is going to be able to pick up on. It's difficult, because you have the game mechanic completely internalized, but you need to get yourself in the mind set of a new player and teach them your game effectively.

On the positive side, I think the presentation of the game, while it still feels like an Alpha, shows a lot of promise. I think a stealth game like this could be interesting and I would like to check out the game again after you revisit the tutorial.
Reply