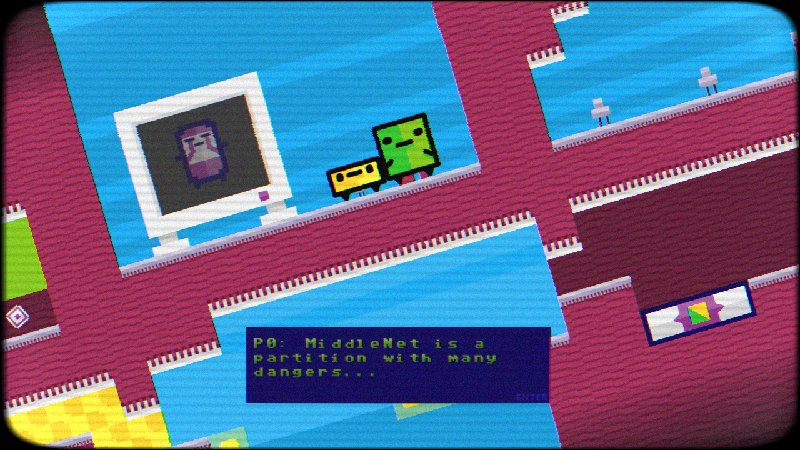 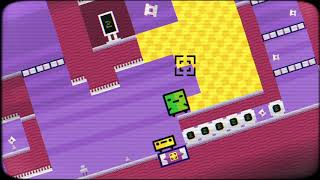 1 year ago by 2players

Super Co-op Adventure is a quirky and surprisingly challenging co-op puzzle platformer where you help two uniquely skilled blocky characters make their way through a glitchy computer world.   Playable in single player or in local co-op, in Super Co-op Adventure you take control of two little characters named P1 and P2, who are trying to escape from the EmptyNet to a better life in the ExtraNet. However, during their journey they end up crashing into an unstable version of the ExtraNet and must now use their unique abilities to escape.   You can control P1 with the AD and W Keys and P2 with left and right mouse buttons. P2 can’t jump independently, but can act as a bouncy platform for P1, can squeeze into tight spaces and can hover through the air a little. P1 on the other hand is bigger, can jump and can cause mini-earthquakes when he falls from larger heights, causing secret passages to appear. P1 and P2 can assist each other in lots of different ways, often with the aid of special pads they stand on allowing them to do anything from teleporting to moving blocks in the game world.

Animation Mechanics
I just want to upload mine and this site is forcing me to roast you. Nice game pal :)
Reply
d

Game Graphics Tutorial/Learning Curve
This is a pretty good game that I can see a lot of casual players enjoying it, but it still has some issues holding it back from appealing to that demographic.

Some gripes:
- Perhaps it was an aesthetic choice but maybe you should remove the tilting of the screen. There's no in game reason for this tilting.
- Keep the flashes to a minimum or give an option to remove them. I do not suffer from epilepsy but this is very bothersome to look at every time I pick up an item that it started to hurt my eyes.
- I see no reason why I should use the mouse when I can just use other buttons on the right side of the keyboard, especially if I have to use Enter (which is on the right side of the keyboard) to skip dialog. If you do insist, at least give the option to use other keys.
- Spell check. I saw some grammatical errors.
- Some puzzles are very hard to figure out due to lack of information. I took me a while to figure out that P1's slam ability had to be at a specific height, and even now, I don't even know how high that height is. I also got stuck on the puzzle that introduces the trampolines. I have no idea how to pass it due to lack of information.
- I don't read stories at first. Usually save them for when I watch the game on YouTube. I would appreciate the option to skip the storyline.

Some compliments:
- Very catchy music. Though I only heard the one in the tutorial, I hope there is more music of that quality.
- Aside from using the mouse, the controls are nice and responsive. The inertia of the characters are just right. Collision boxes are also optimized for the puzzles.
- Graphics and aesthetics are appealing, sans the flashes.
- Despite me skipping the story, I like the fact that this game has one and will be interesting in a second play through or when I watch the game on YouTube.
- The puzzles are unique and have variety.

Some suggestions:
- Give options to the player to change things such as removing the swinging screen effect and turn off flashes.
- Let the player choose their own controls.

Overall: The game is looking great, it's fun to play, but some of the not-so-useful effects should be at the discretion of the player.
Reply