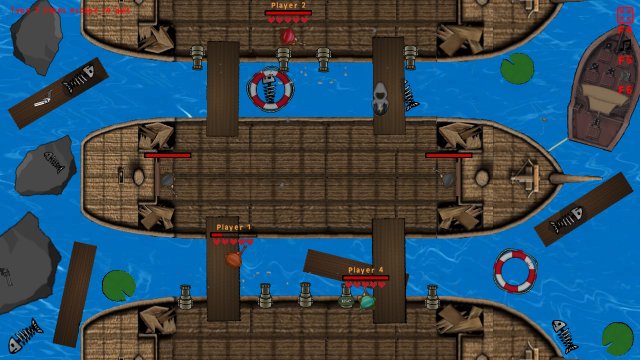 Hi, I am Blue Apple a novice developer in the group Cute Software, and I'm here to share with you our new game: "Shotgun Evolved", it's a top-down-shooter where you fight your friends (in the same computer) in a 2 to 4 players arena through different maps and game-modes

-Controls: Every player got 6 keys (on the keyboard or on the controller), 2 to turn right or left, 2 to walk forward or backward, 1 to shoot and 1 to interact with objects, they are a bit hard to get used to, but this gives you an excuse for losing every time :p

-Game-play: The goal is simple, "fight until the other players lose all their lives", you can lose a life in different ways depending on the game-mode (being killed, an opponent capturing an outpost...)

-Items : There are 3 items, the 'up' item that is thrown by the players when they die which upgrades your shotgun, the 'heal' item that is dropped by bots(pirates,skeletons...) which heals you, and the 'life' item that spawns somewhere on the map every 10 s which gives you an extra life

-Extra : You can change some settings before starting, like the number of lives, the speed of capture, deactivate players'names/objects/bots and activate "hyper speed" which makes everything two times faster

And that's all, don't forget to give your opinion and report the bugs, have fun ! :D

Alpha 0.1.1 change-log: (an update more focused in the options of the game)
-game's optimatisation (it uses less memory and its size is smaller)
-improved some textures
-"credits" button added with more precise credits and links to all CuteSoftware's social networks and yahya's youtube channel
-"chose map" button added(it's gonna be usefull when more maps will be added)
-intro with the group's logo "Cute software" added
-the game's version now appear under the title
-added options to :
*make npcs appear(bots) or not
*make activable objects appear or not
*make players'names appear or not
*change number of lives 1-->5
*change capture speed 5s or 10s
-new game-option "hyper speed" , when toggled on ,
time runs 2 times faster(walking , bullets even capturing)
-added a button to switch from full screen mode to window mode , also possible with pressing 'f4'
-pressing 'escape button' once pause the game
-pressing 'escape button' twice takes you to the menu
-added loading times when you enter an arena to makes the game use less CPU (but a bit more RAM is needed)
-arena's options no longer return to default when you return to menu
-added 2 buttons to turn off or on music and soundfx , also possible with 'F5' and 'F6'
-You can now play with controllers (xbox 360 , xbox one , ps3 and any other Xinput controller)
-You can now change controls
-all versions will be on a windows-installer format(you should uninstall the previous version before installing a new one)
-added a "more" button that takes you to a screen where you see the "help section", change-logs of all versions and can be redirected to the main-forum-thread or to my website
-now there is a website for the group where you can send me emails https://themixios.wixsite.com/cutesoftware , it will be more useful in futur :D
-The game's size decreased from 50Mo to 12 Mo   Some bug-fixes :
-the left_bottom cannon was moved a little bit to the right to make sure its canon-balls don't hit the left solider anymore
-the bullets now spawn on the shotguns's edge instead of spawning near it which made you sometimes shoot yourself...
-bullets dispear 1s after quitting the screen instead of being destroyed when they reach the screen-border
-players can reach the screen's border instead of being blocked 10 pixels before
-more crash issues :p   Next update (alpha 0.1.2) is going to be full focused on gameplay rework , so i hope you'll enjoy it :D

Game Graphics UI Graphics
Cool game, I love the top down view =p The UI with the trees moving really fast mad me a little sick tho'
Reply