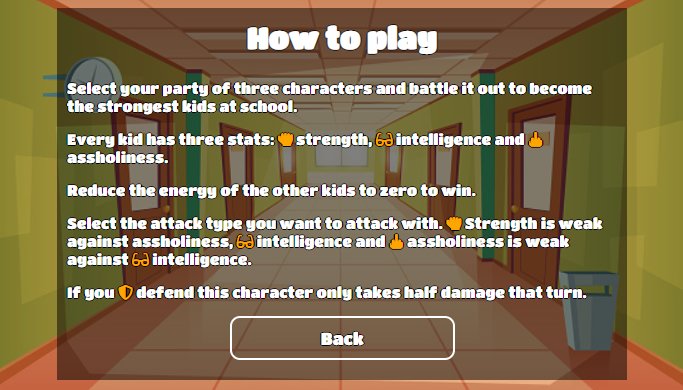 Select your party of three characters and become the strongest kid at school. There are six different classes to choose from: strength (bully, wally, sportskid), assholiness (squealer, rich kid) and intelligence (nerd). Battle it out in turn-based 3vs3 matches. All characters attack at the same time in this brawl.

How to play: choose an action for each character.

Attack: deal damage to one target.

Defend: this character only takes half damage this round.

Added a How to Play page

Mechanics Story/Writing/Dialogue
The best part of the game atleast for me, was the Mechanics. really liked that certain types are weak to others. I believe that the game would be better with something like story mode, that already is in upcoming features. Overall i would say that it is okay.
Reply

Thanks for your roast. I was aiming for a battle system that is easy to understand yet offering enough possibilities to play strategically. I will probably add like one or two more tweaks to it like formations. Also when adding Story mode the game should not be longer than 5 minutes. Otherwise it would get kinda boring.
Reply
A

Game Graphics Level Design
I like your game graphics but yor level design is not better than mine instead its worser then mine so guess your game is ok.
Reply

Thanks. If you upload your game I will give it a try. 4
Reply

UI Graphics Controls
This game is amazing!!! I like the ui alot! the controls where a little hard but it was ok.
Reply

Thanks, man! Yeah, the battle menu is one thing I gotta improve in the future.
Reply
n

Thanks. I will add a button to open a "How to Play" page on the title screen.
Reply
n

maybe if you have a little more time or willing to do, like a small animation of a "story" and a single 1 vs 1 fight where you could put some arrows step by step on how to play.

AND
maybe if you have a little more more more time put some feedback on attacks to know with more impact if that action do damage just to make it more teatrical.

Thanks for sharing your ideas! :)
For now I added a simple how to play page. When I find more time animations will be way to go. Also the audio/visual feedback depending on attack is really good. I will at least add the damage dealt to the battle ticker and maybe color the number differently.
Reply