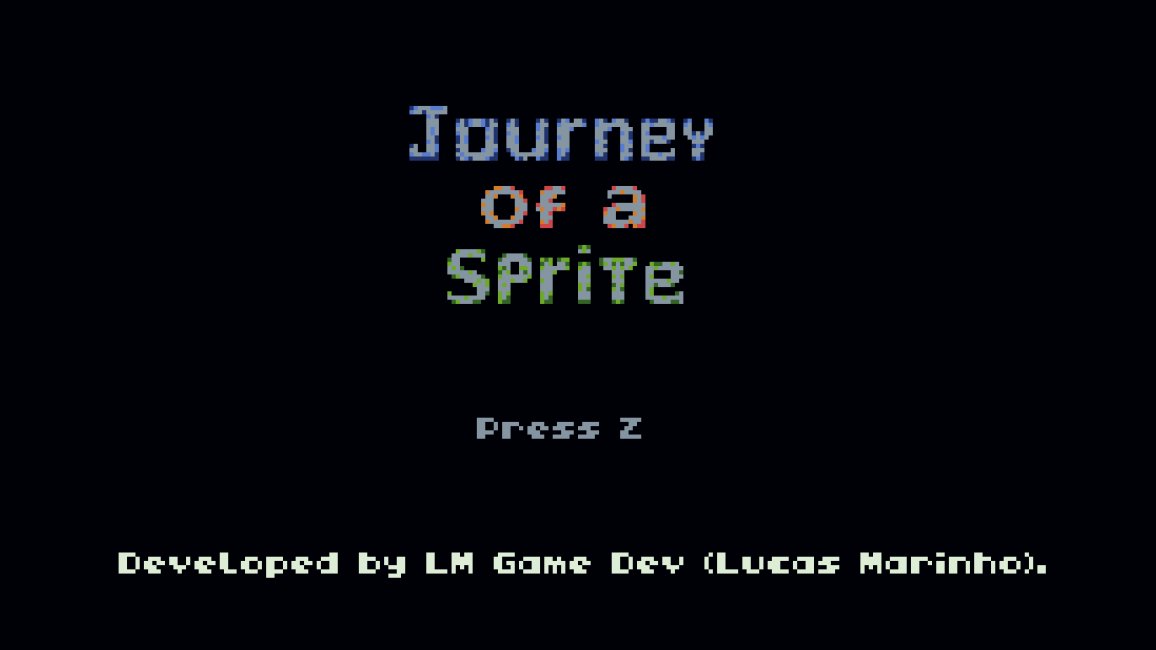 Journey of a Sprite

An adventure 2D RPG Game!
This is just a demo, working on the full game
Download

New features to be added

- Music (I really need to learn how to compose)

Cons:
- Difficulty: enemies move too quickly making it too easy for you to die.
- Collision masks/hit-boxes are too big in general.
- Music
- Length of demo (though I assume this will increase)
- Name of the game (imo)

Thanks for reviewing mate!!

So about the collision I have already done an improvement just haven't launched yet.

The name has a meaning and will be explained during the story.

Also I'm not good composing but I'm working on it haha.

And will have far more levels just need finish them.

About the enemies speed, I'm trying to find the bet number for it!!

Thanks again. I really appreciate!
Reply

Game Graphics Mechanics
I played the demo and here are my thoughts.

The pixel art is charmingly retro but the game mechanics need some work.

The first pathway down all you need to do is stand at the edge of the screen and the baddie from the next screen down will bum rush you and kill you from outside the screen. It seems like half the time I try to go down that path to the next screen I am instantly greeted by the you died screen.

The enemies could stand to be slowed down a bit for better player reaction time and the starting health of the player is not full and one shot = death.

still this game does have potential.
Reply

Thanks for reviewing. I'm aware about all of this and I'm working to correct them all!
Reply
d

Game Graphics Physics
I really like the look of the game and the idea, but as other people have suggested make the hitboxes a bit smaller so that it is easier to get through doors.
I really like it though!
Reply
r

Game Graphics Animation
I love the graphics and basic mechanics

besides the collision masks, I think having a proper attack animation would help immensely.
Reply
M

Game Graphics Controls
I'll start with what I like here.
+ Your graphics are quite nice to look at, reminds me of the original Zelda games.
+ Nice work on the minimalistick UI, it doesn'y get in the way.
+ The control scheme is very simple to grasp, no complication there.
+ The explorable areas are a nice touch when they work (more on that later).

Now for what isn't working.
The issues here are small but they can break the experience, quite a bit.
The player's collision box keeps me from moving through some spaces (doorways mainly),
I actually thought I couldn't go through the first locked door (even though I had a key), but the problem was I couldn't quite fit through the doorway and thought at first that I maybe had the wrong key or that the first door wasn't unlockable yet, so I ended up trying to explore the wide open space south of where you start (got killed instantly but I'll get to that later)
I tried the first door later and actually got through, which didn't take long for me.
Sidenote: Corners on things like pillars are easy to get stuck on because you kinda just stop moving when you're trying to get around a pillar, another collider issue it seems.
Another collision box issue is the enemies.
The hit boxes for your enemies are too big, they barely even have to get close to you to kill you, which feels unfair, because you don't know which distance to kill from.
If exploration is what you were going for you kinda killed it in the first room,
I died as soon as I went to the open space south of where you start and didn't even see who or what was there, or what killed me until later. The feeling I got was that those open spaces were dangerous. Exploration is what you were going for, but you accidentally punished it in the very first level.
When I got through the first unlockable door, I hesitated to go into the explorable room, because I thought I would get insta - killed again. I tried anyway (because I needed another key) and managed to kill the snake that was in there (and got the other key).
That's when I saw the other explorable space I got insta - killed in. I realised that I only got killed because the snake (which already had a big collider on it) was too close to the entrance. Maybe this was a mistake on your part, or it was intentional, I'm not sure.

Final thoughts
I didn't really have any issues with the rest of the rooms after that, (except the explorable area with the three snakes I couldn't kill).
The only thing I noticed, (which is really just a nit - pick on my part since you're still in development, so its probably irrelevant) was the portal you walk through that ends the game.
It feels awkward and out of place, not as much because of the story cliff hanger you added, but because the room doesn't require any exploration to complete the game. You could end the level right there and miss the goodies you could've found in the other explorable areas.
It kinda feels like a missed opportunity for me as a player, because I ended the game without finding what's in those hidden areas.
But I guess that's just me.
Hope that helps!

UI Graphics Level Design
Honestly I liked the bit I played, however, it felt kinda difficult to get through doorways and tiny spaces and i ended up getting killed a few times because of it. Overall though it was pretty fun and it has a lot of potential!
Reply
L

Level Design Physics
Hmm. Has loads of potential! But why is it so hard to go through doorways?

Also, how about a Mac version? I use a Windows laptop, but when I'm on the go, I'll use a Mac. And there's no Mac version!!! D:
Reply

I like the graphics, very old school. The overall feel is good, I felt like I was back as a kid sitting in front of my NES.

I saw someone else mentioned the monster movement speed. It's thrilling and all but it made me have to walk on eggshells with my combat experience.

I'd say make the demo at least 2-3 levels long, especially if they are as short as the first.
Reply