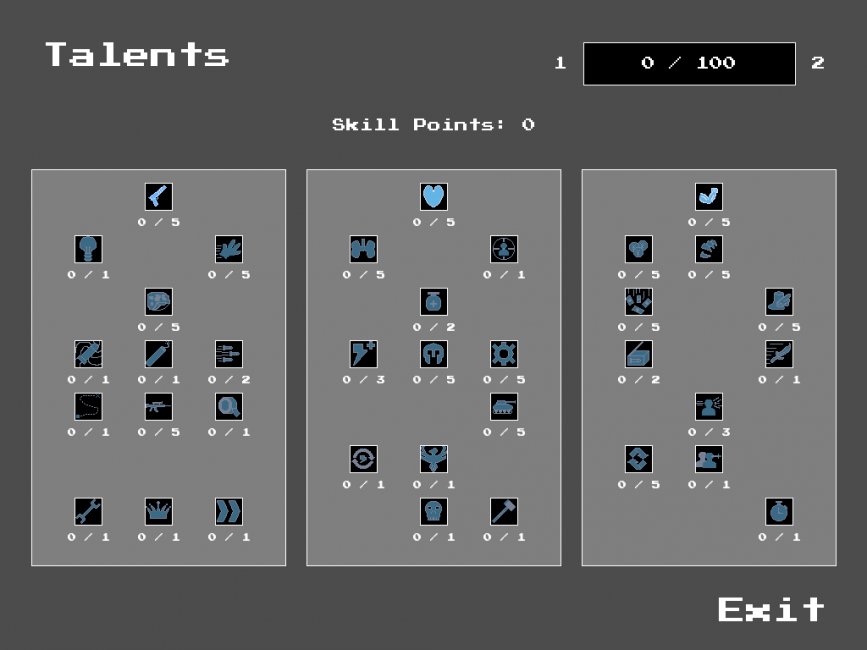 Generic Zombie Shooter - Redux is a top-down wave-based shooter and is a remake of my first game from 2013. The new game features enhancements over the gameplay of the original game and is continuing to become less generic.

Almost all artwork is from the original game and will be changed along with the music and sound in future updates once concept art is done.

Its been too long since the last update, so this update will not have as much content, but the features added are a big change. Now that I can begin developing regularly again, the next update will be a much bigger content improvement.

v1.3.1 will see bug fixes, performance enhancements, and features that didn't make it to v1.3.
v1.4 will focus on the crafting system, difficulty modes, the scoreboard system, and multi-screen progression.

Tutorial/Learning Curve Mechanics
You have all the ingredients of a top-down shooter; a high focus on functionality. New ideas, polish & tweaks should be easier with core functions working. The progression was fine to me, as new enemies were introduced at what seemed to be every two waves. It's a Functioning Top-down Shooter not a Unique top-down shooter---you'll have to find your groove as you polish.

ACTIONABLE FEEDBACK
1) Simplify Weapon Switching - Pressing numbers 1 to 9 is not intuitive as shooting game. Weapon Cycling is much more common, utilizing the UI efficiently and one/two buttons instead.

For example: Press Q to go to Previous weapon and W to Next Weapon. Your Currently Active weapon is shown in the UI as you have it with an ammo meter---however on the left of the active weapon photo add the weapon picture of your previous in-line weapon, then on the right of the ammo counter, add the next weapon in your line-up/inventory.

2) Per-Weapon Upgrades - Some weapons feel under-powered or their accuracy is questionable---there is also not much variety. Small Weapons Upgrades is a way to stretch your current set of weapons without adding more.

For Example: Upgrade the Pistol for a Red-Dot sight that helps your eyes in aiming. Upgrade your Shotgun with a Flash Detector so your flashlight glow turns ready when an enemy is in range. Upgrade your Bow to shoot two arrows/three arrows/fire arrows/fast charging/poison dipped arrows. And so on. Adding any of these would help make the weapons more impactful, fun to use and worth trying out different guns.
Reply
p

Yeah, the weapon switching is something I'm planning to change in the next update. I might do something similar to Enter the Gungeon.

As for per-weapon upgrades, I'm also planning for the next release to implement a perk / talent tree system to replace the Skills that are in the game now. Everything you mentioned is a good idea, but I'm not really sure what you mean by a "flash detector" for the Shotgun.
Reply

Glad to hear you have new developments in the pipeline! I should have typed "Enemy Detector": your flashlight would turn red any time an enemy is in optimal range with your shotgun. It is a spread-shot weapon so there is a certain mid-range where you'll do max/best damage.

Call of Duty Advanced Warfare has this as you upgrade your shotgun----enemies barely outside of range will face minimal damage which may be hard for players to measure mentally. So instead your has a Line of Sight flasher on one of the shotgun that turns red if an enemy is mid-range for best damage.
Reply