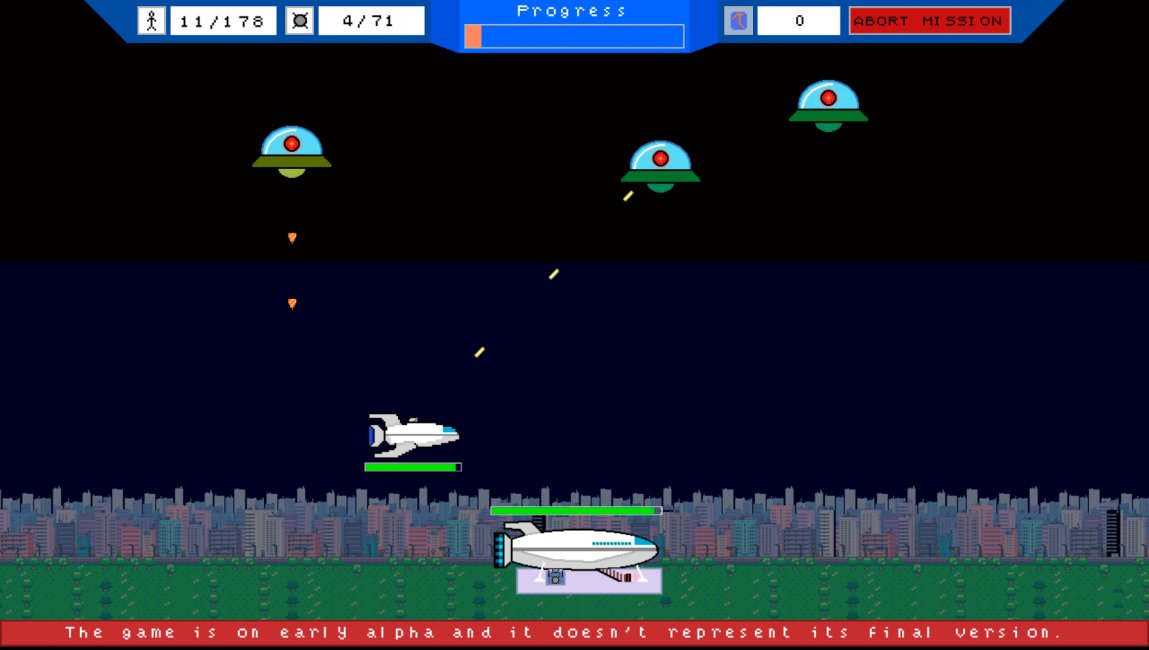 Earth has been invaded from outer space creatures, now you must rescue the surviving humans and gathering resources to build an interstellar ship so humanity can start a new life on a new planet.

Inspired by Space Invaders, its an arcade game of survival and shoot ‘em up for PC Win.

Its now available on itch.io for free, and if you could play it and provide me feedback about the game, it will be great.

Here’s the game link: https://ghenriquemo.itch.io/escape-from-invaded-earth (i coundt put the game file here because it was bigger than 20mb).

Thank you very much  XD.

This is the first build to see the light.

A lot of things.

Mechanics Level Design
I like the idea of this game but it needs more work.

One of the biggest flaws in the design is that you don't need to destroy all the enemies. You can simply destroy all but one blue enemy and just not attack until all the passengers and cargo are loaded. This enemy attacks a random spot with a single shot every 10 seconds or so and no other enemy will appear until you destroy it. Therefore, for an easy win, just leave one of these enemies alone as it will never deal enough damage to destroy you or the passenger ship before you have rescued everyone. This game would be so much better if there was an actual threat.

Another aspect that is more obvious that needs work are the graphics. I don't mind the MS Paint style quality, but you need to stick to a style. The game has like 3 different art styles and they don't look good next to each other.

It was a fun game for the few moments I played but the flaws do not make it exciting for the long run.
Reply


Okay, I just saw the advisory that this is an alpha from the screenshots. I did not realize this and wrote my review like an actual product. I apologize for this.
Reply
g

Hey man, no problem. But you gave me a good insight about the threat issue.

Im still looking for the design style. I'll do in pixel art but im still didnt finded a way to it.

Thanks for the roast.
Reply

Controls Level Design
I liked the simple controls and the mouse aiming works better than on a lot of games I've tried recently. Graphics are simple but they get the job done.
What I think needs more work is the level design. Shooting down 35 fighters is a bit tedious when there isn't that much variety in the enemy ships. I also found that the 4-degrees of movement wasn't all that useful -- most of the time you can just camp out in one spot and as long as you're fast on the trigger, destroy any enemies before they force you to move.
Reply