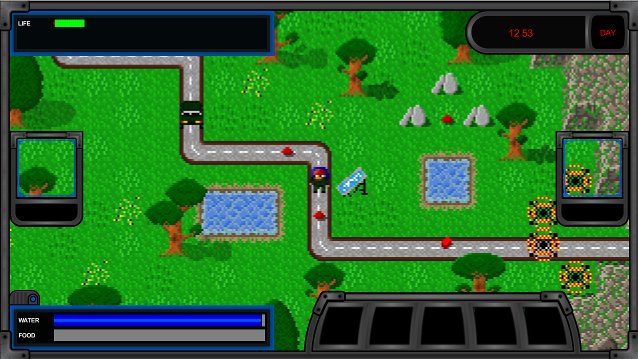 5 years ago by armitage81

Cosmodog is a fast-paced, turn-based adventure game that can be downloaded for free under http://www.cosmodog.eu/cosmodog.html.

Here are some screenshots

Check out the trailer

In Cosmodog, you will find:

The game was developed in Java and can be played on Windows systems. It was tested on Windows 7 and Windows 10. You don't need anything to play the game. Just download and unzip the file and click cosmodog.exe.

This game looks like it would be fun but I can not find a way to play it because I have a Chromebook not a pc.
Reply

It looks like it's PC only, although maybe they could package it for web if they used Unity or something
Reply

Sorry, currently this game is Windows PC only as it is based on Windows' implementation of Open GL.
Reply
m

UI Graphics
it is a nice game but needs work
Reply

Thanks for your feedback! Could you specify what I should work on in the first place?
Reply

Story/Writing/Dialogue Level Design
Hey there ! That's a great start ! Keep it up !

So I played roughly half an hour and I didn't expect that much content, maybe a bit too much to be honest.
It's clear that you are passionate and wanted to create more and more, but i'd say, from now on try to focus on improving your core gameplay and experience, otherwise people won't discover the story you've created.

Let me break down my thoughts from the start :

- Overall : Interesting and has potential but lacks a bit of personality and UX needs a lot of polish

- Main menu: Try to avoid flashing UI and it's a good place to summup your game's ambiance and tone, you should think at ways to hook your players from there.

- Texts : You deliver a lot of content and it's a bit tedious to swallow. By that I mean it's several pages of plain white text on black background. As it seems to be one of the main feature of your game, you should focus on that, try adding sounds matching what's going on in the story, segment your texts more instead of a page by page system, try adding animations to your characters so they match the mood of what's going on, try to find a way to recognize what is what (dialogs in italic, souds / events in bold, etc).

- Tutorial: The first big mistake is those tutorial boxes, gosh avoid them like if they were the plague haha, it's ok to have prompts but please not 10 in a row and especially when it's not in a situation that requires it. The tutorial is one straight line with "every" element of the game put one after another, it doesn't help the player understand what's going on, does not give the rewarding feeling of discovering something new and overall it's overwhelming (after the 4 pages of text, the 25 infoboxes and 1 km long straight pass, I started to feel bored even the game started, but your narration kept me going after that). Having a tutorial is fine, as long as it doesn't feel like one, you clearly like to write so take advantage of that, make the player discover stuff through your character, for example, instead of putting a can on the narrow path, have an abandoned camp with teared backpack, find a letter in it, have your player hooked and then prompt your box to tell you've found 1 ration blablabla. Narration is the strength of your game so take full advantage of it !

- Signs and feedbacks: Well, some things are clear, some too much and some others not at all. At the very beguining of the game I took a lot of damages, even before I got the prompt telling me the zone was radioactive, it frustrated me, felt like you wanted me to lose. I don't know if it was a bug or something not clearly shown to the player. I even realized later on that the radiation level is written on the top right corner of the screen, if it's an important mechanic, show it more, have your world show what's going on instead of counting on UI. For example the enemies's fov was really clear and understandable and it felt good to run to avoid them. About running, please remove that "Blocked" text when you bump into something hahaha, we can clearly see that we're running into a wall.

- UI; You'll have to work a bit on that too, have your UI connect more with your game's world, right now it feels more like debugs than anything. Maybe have some more sprites to show what it is about, make it responsive (bars shaking, glowing, or any type of effect that fits the current state of the situation)

- Extra: I really loved the first time I saw goose fly through the screen, made me feel a bit more grounded in your universe. That's a very good path to follow if you want your players to connect with your world. Make it feel alive !!! The first secret hideout was easy enough to find and taught me more about your game than the tutorial. It was funnier to run and avoid the enemy encounters than to fight them, maybe focusing a bit on that aspect could create an even more interesting aspect for your game :).

I hope this will help ! Keep working on your game, you're getting somewhere !

I just saw your expanded feedback. Thanks for that!
Reply